Since 1986 we analyze the start-ups in the WW storage industry, which has allowed us the proper perspective from which to gauge the evolution over time.

2019 was not great year at all: we didn’t find any new one born that year up to now and such a disaster never happens historically. 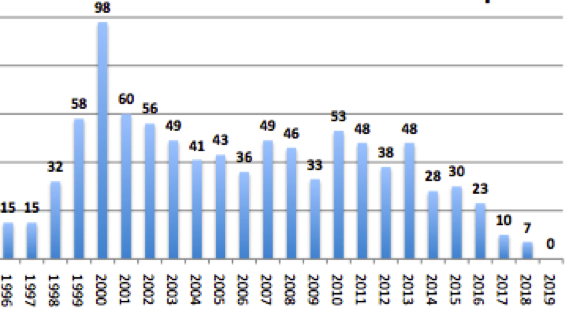 Why poor results in 2019?
The WW storage market is no more growing so fast and then not a real good opportunity for investors. Furthermore in the more popular technologies attracting users (SSDs, all-flash systems, software-defined storage, scale-out NAS, hyperconverged platform, cloud storage), there are already too many competitors including about all storage giants.

Furthermore, there is currently about no new killer technology that could convince VCs, just improvements.

One of the reasons is that the number of M&As is largely decreasing as often start-ups are created by people leaving acquired companies. 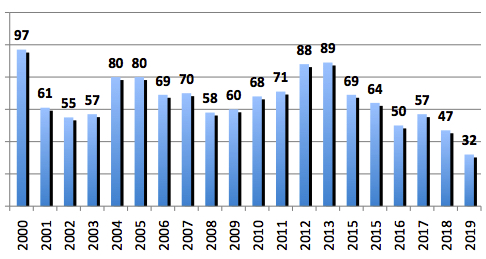 VCs have put $30.5 billion in storage start-ups since we collect these data. This amount is higher than the total figure in the table below from 2000 to 2019 only.

On average, a company got historically $53 million in total funding.

PER ACTIVITY AMONG CURRENT 515 ALIVE START-UPS

Total is more than 515 as some companies are listed with more than one activity.
(Source: StorageNewsletter.com)

Where Are They Going?
What becomes of all these storage start-ups after we identify and count them? The conclusion is not really reassuring, a reminder that investment in these sorts of companies is in fact highly risky.

On all start-ups identified, only 3% eventually go public, and thus allow investors generally more than just to recoup their original stake. The same is generally true for the 30% that find buyers, although the asking price is not always greater than the total of all sunk investments. It is, in any case, the emergency exit that many companies are seeking. Meanwhile, another 17% just vanish off the map – doors closed.

Half of all alive start-ups remain in a holding pattern, still a start-up, still nursing the secret hope of an offer from a storage giant seeking to fill-in a missing technology.

To get more money to finance the growth of young companies, IPO seems a better way than an acquisition.

* in $ million
** became public via a merger with Network Peripherals
(Source: StorageNewsletter.com)

WHERE DO 513 CURRENT ALIVE START-UPS COME FROM?
Storage is mainly an US sport.

* Several start-ups were funded in Israel but transferred HQs in USA
(Source: StorageNewsletter.com)

Note: when there are more than one round of financial funding the same year, we add them considering the total as only one.