Total external OEM storage capacity shipped was up 27.9% year over year to 22.1EB during the quarter.

“The external storage systems market recovery observed during first quarter of 2021 continued even stronger during the second quarter,” said Zsofia Madi-Szabo, research manager, infrastructure platforms and technologies. “The degree to which demand returned was highly influenced by the rate at which each regional economy has recovered from the difficulties associated with the global pandemic.”

Enterprise External OEM Storage Systems Results, by Company
Dell Technologies(a) was the largest external enterprise storage systems supplier during the quarter, accounting for 26.8% of WW revenue. HPE/H3C(b) was the second largest supplier during the quarter with 10.9% of revenue. NetApp and Huawei tied* for third place with 9.9% and 8.9% of total revenues, respectively. Three vendors, Hitachi, IBM, and Pure Storage, tied* for fifth place in the market with shares of 4.9%, 4.7% and 4.1%, respectively. 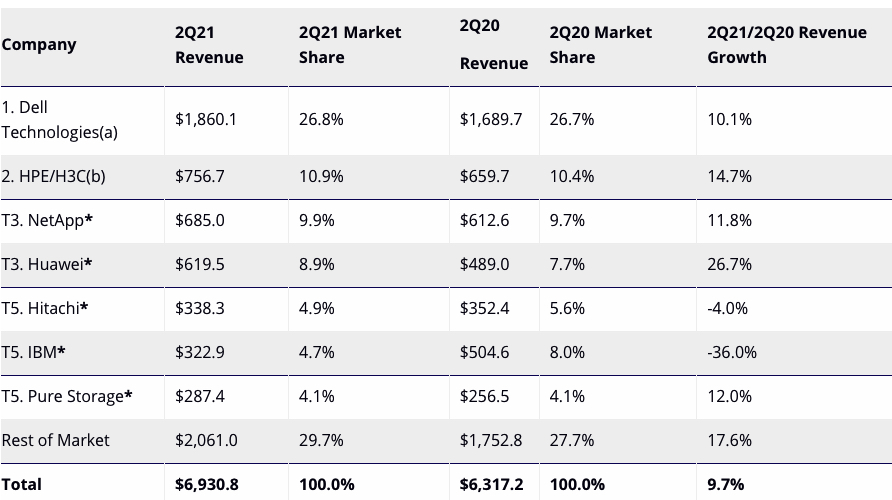 Notes:
* IDC declares a statistical tie in the worldwide enterprise external storage market when there is a difference of one% or less in the share of revenues or shipments among two or more vendors.
(a) Dell Technologies represents the combined revenues for Dell and EMC.
(b) Due to the existing joint venture between HPE and H3C, IDC is reporting external market share on a global level for HPE and H3C as “HPE/H3C” starting from 2Q 2016. Per the JV agreement, Tsinghua Holdings subsidiary, Unisplendour Corporation, through a wholly-owned affiliate, purchased a 51% stake in H3C and HPE has a 49% ownership stake in the new company. 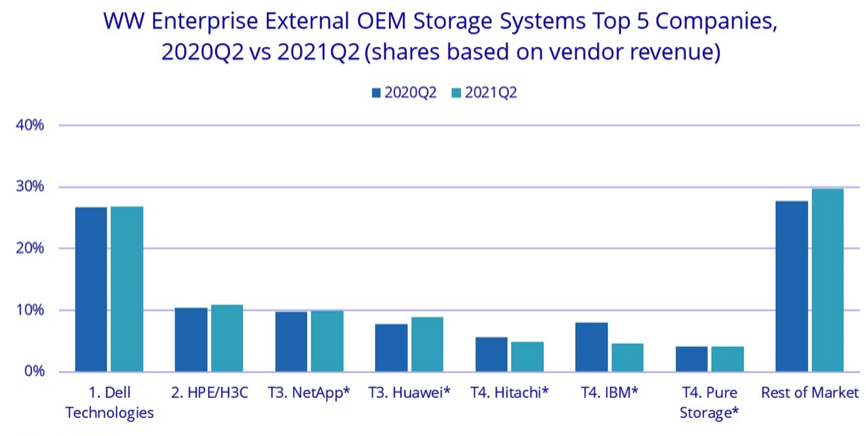 Taxonomy Notes
IDC defines an enterprise storage system as a set of storage elements, including controllers, cables, and (in some instances) HBAs, associated with 3 or more disks. A system may be outside of or within a server cabinet and the average cost of the disk storage systems does not include infrastructure storage hardware (i.e., switches) and non-bundled storage software.

The information in this quantitative study is based on a branded view of the enterprise storage systems sale. Revenue associated with the products to the end user is attributed to the seller (brand) of the product, not the manufacturer. OEM sales are not included in this study.