At the 2019 NAB Show, Qumulo, Inc. announced growth in the media and entertainment (M&E) market, as well as performance increases and new advanced enterprise protocol capabilities.

Its hybrid cloud file storage will be featured. The company will be providing live demonstrations of its software’s capabilities in a 4K editing environment, as well as its recently-announced CloudStudio and CloudContinuity products, which enable media and entertainment organisations of any size to scale production into the public cloud.

Qumulo will also showcased its software’s performance capabilities for streaming, as well as real-time data analytics, and the ability to enable burst rendering to the cloud.

The C-72T enables customers to start at less than 200TB of capacity and scales to beyond 3PB in 1U, linearly scalable increments. Many other solutions often require organisations to select a large hardware configuration in order to be economical, or choose a small solution that doesn’t scale.

“For too long, file customers have been forced to choose between capacity versus entry point, performance versus price, or scale versus incremental cost. Qumulo believes customers shouldn’t have to make those choices,” said Molly Presley, director of product marketing, Qumulo.

Qumulo’s file system achieves performance increases
It is designed for performance, primary file storage and active archive environments. The company is constantly improving and enhancing its software to deliver more performance and capacity per dollar for its customers.  As part of Qumulo’s software-defined model, any customer can take advantage of these ongoing improvements, whether they purchased a system a month, a year, or several years ago.

Fim’s software innovation has achieved several improvements to its performance over the past 12 months, including:

Introducing Advancements in Qumulo Cross-Protocol Capabilities
Enterprises have high standards on their requirements for NAS protocol implementation. Qumulo continues to advance its ability to integrate with name services, automate permission handling, and offer the protocol support needed for the complex environments.

XPP lets users access and collaborate on the same sets of files over Server Message Block (SMB) and NFS protocols without concern over permissions compatibility.

Previously, system admins would be required to segment users by protocol or set up elaborate permissions inheritance schemes to prevent users from inadvertently breaking file permissions and locking others out. With XPP, admins can spend less time managing, troubleshooting, and repairing permissions issues, and can allow cross-protocol workgroups to collaborate across the Qumulo file system.

Introducing S3 Interface to Qumulo Storage with MinIO Partnership
In response to customer demand for S3 protocol support, Qumulo has announced a certified solution with MinIO, Inc. for its Minio open source object storage server. This solution will enable customers to run both file and object workloads from the same storage infrastructure.

“We believe MinIO is a compelling solution for our customers looking to leverage a single piece of storage infrastructure to power all of their own workloads, and for those looking to take advantage of both a modern protocol as well as the economics and performance file storage can provide,” said Presley.

For information about S3 compatibility, and expected performance, see this tutorial on how to deploy a MinIO gateway with Qumulo’s hybrid cloud file storage.

The company accelerates product and features development and keep competition under control this time with three key extensions: a new denser and faster 1U appliance, XPP for cross-platform permissions and the adoption of Minio to offer an S3 service on top of NFS.

The company chose to address closely some markets with deep integrations like M&E, oil and gas and we anticipate a few others. Multiplying vertical use cases will finally make Qumulo a universal file storage platform for both on-premises and cloud with the recent addition of GCP after AWS. Azure should arrive in the next few months.

XPP (Cross-Protocol Permissions) seems to be the first iteration to a more global cross-platform integration between NFS and SMB worlds across Linux, Windows and MacOS and probably other data access protocols serving as a Qumulo IAM (Identity and Access Management) service. It reminds the acquisition of Likewise by EMC early 2012 for approximately $37 million to offer a similar approach between Unix, Linux and Windows environments as Isilon ran a Samba flavor for CIFS services. As Qumulo adds now a S3 interface, we imagine XPP could be extended as well with this new service. 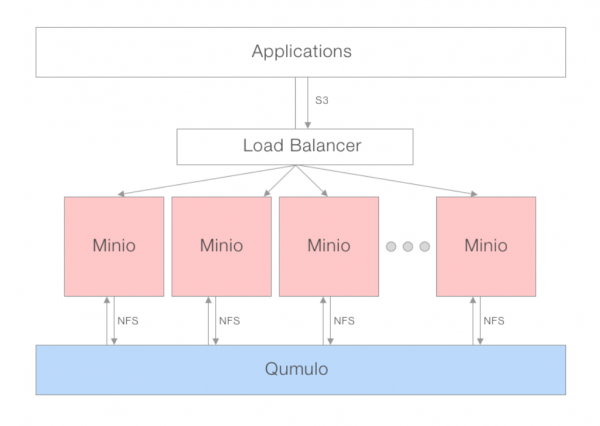 After Datera and iXsystems and probably others, Minio is again selected as its S3 service has started to represent today an adoption standard. As Minio is flexible in term of deployment models and with a tons of integrations with various applications for difference use cases, Minio is the choice for pure software object storage in a total hardware agnostic approach. In fact, Qumulo will probably change how the product is integrated in the future, there is no need to develop a Qumulo S3 service, Minio does the job. 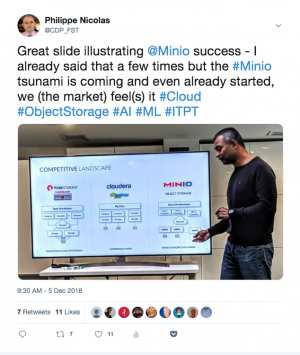