Qumulo, Inc. announced an expansion of its cloud portfolio, including two new products – CloudStudio and CloudContinuity – as well as support for Qumulo’s cloud-native, distributed hybrid file system on the Google Cloud Platform (GCP).

According to Allied Market Research, the global cloud storage market size is estimated to reach more than $97 billion by 2022, at a CAGR of 24.8%.

“File data is the engine of innovation. The faster that innovative organizations can create, store, analyze and share their data on-prem and in the public cloud, the faster they can accelerate winning business strategies,” said Bill Richter, president and CEO, Qumulo.

These announcement includes the following elements:

Qumulo Trusted by Leaders to Help Leverage Power of Cloud
Many organizations across multiple industries trust the company to help them take advantage of the cloud:

Bill Richter, president and CEO, Qumulo, said: “The cloud enables enterprises across all industries to unlock business opportunities by bringing agility and responsiveness to their organizations. Lifting workloads and data to the public cloud allows customers to better collaborate and manage data across regions, and across the world. Qumulo’s mission from day one has been to help our customers unleash the power of their file data, whether it is on-prem or in the cloud.”

Ryan McNeely, partner and creative director, VisualCreatures, said: “What made  CloudStudio so appealing to VisualCreatures is the opportunity to rapidly and seamlessly scale our editing, animation and VFX production to the cloud, so that we could continue to meet customer demand under incredibly tight deadlines. This could be a strong competitive advantage for a boutique studio like ours, because it allows us to continue our focus on producing great work for our clients and growing our business.”

David Smith, CEO, Teradici, said: “The CloudStudio creates a powerful, complete solution for customers. Together with Qumulo, Teradici can provide a clear and efficient path for organizations to move desktops, applications and data to the cloud, whether using AWS, Google Cloud Platform, or a combination of either with on-prem data centers.”

Resources
• File Storage for the Public Cloud
• Demo Video: Host a virtual studio in the cloud with Qumulo
• Data Sheet: Qumulo for AWS
• Case Study: FuseFX: Our Journey to the Cloud
• Video interview: Get Off My Couch! – Storage for VFX with Jason Fotter of FuseFX
• Blog Post: Storage and hybrid cloud computing: The era of scale-across is here
• Blog Post: Migrating to the cloud: Choosing a cloud storage provider
• Try Qumulo’s Hybrid Cloud File Storage

Qumulo continues to extend its platform coverage now with GCP and soon with Azure to offer a 'total' multicloud approach in addition to on-premises deployments.

The product team has decided to give a name to its replication feature already available and picked CloudContinuity. This is what we name an AACR mode, meaning Automatic Asynchronous Continuous Replication. It supports 1-N and works at the directory level copying entire file with no yet deduplication or bidirectional capability.

The table below presents an update of file storage market offerings with support of AWS, GCP and Azure. Qumulo will join soon the small list of vendors who run on the three cloud service providers with a marketplace presence. 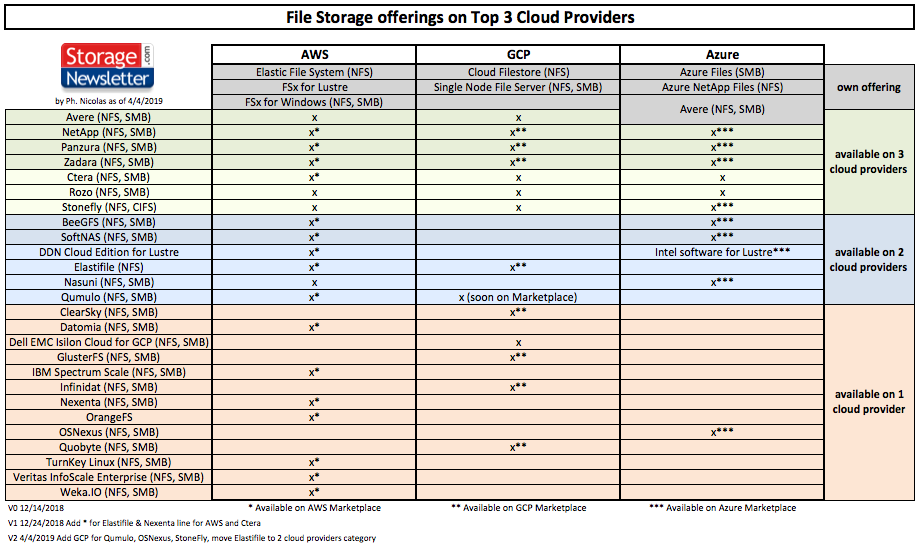