The combined revenue of the top 25 semiconductor vendors increased 2.8% in 2022 and accounted for 77.5% of the market.

“2022 began with many semiconductor devices in shortage resulting in extended lead times and increasing pricing which led to reduced electronic equipment production for many end markets. As a result, OEMs started hedging themselves from shortages by stockpiling chip inventory,” said Andrew Norwood, VP analyst. “However, by 2H22, the global economy began to slow under the strain of high inflation, rising interest rates, higher energy costs and continued Covid-19 lockdowns in China, which impacted many global supply chains. Consumers also began to reduce spending, with PC and smartphone demand suffering, and then enterprises starting to reduce spending in anticipation of a global recession, all of which impacted overall semiconductor growth.”

Samsung Electronics maintained the top spot although revenue declined 10.4% in 2022, primarily due to declines in memory and NAND flash sales.

Intel held on to the ≠2 position with 9.7% market share. The company was impacted by the significant decline of the consumer PC market and strong competition in its core x86 processor businesses and revenue growth declined 19.5%. 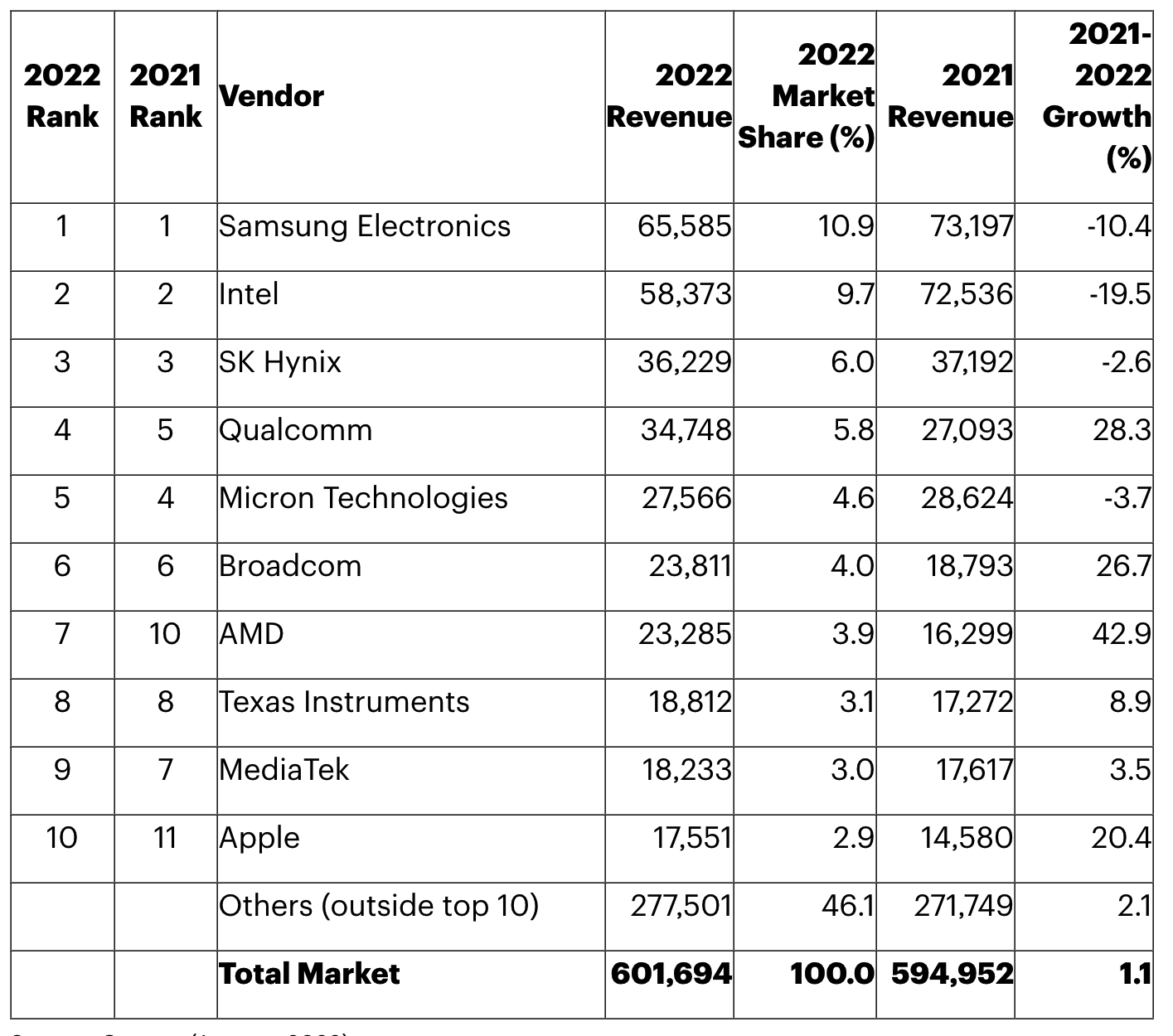 Memory Revenue Declined 10% in 2022
Memory, which accounted for around 25% of semiconductor sales in 2022, was the worst-performing device category, experiencing a 10% revenue decrease. By the middle of 2022, the memory market was already showing signs of a significant collapse in demand as electronic equipment OEMs started to deplete memory inventory they had been holding in anticipation of stronger demand. Conditions have now worsened to the point where most memory companies have announced Capex reductions for 2023, and some have cut wafer production to reduce inventory levels and try to bring the markets back into balance.

Non Memory Revenue Up 5% in 2022
Overall non memory revenue grew 5.3% in 2022, but the performance varied wildly across the different device categories. The strongest growth came from analog with a 19% increase, closely followed by discretes, up 15% from 2021. The growth for both analog and discretes was driven by strong demand from the automotive and industrial end markets underpinned by secular growth trends in vehicle electrification, industrial automation, and energy transition.