The major event of the year came when EMC became the world’s leading storage company, ahead of 1999 leader Seagate Technology. The latter risks losing second place in 2001, with the merger of Maxtor and Quantum. Western Digital, needless to say, fell even further behind.

StorageNetworks took top honors for growth (+665%), while the lntevac was the king of shrinkage (-55%). DISC is still hanging in there as the caboose of the line-up.

EMC, not surprisingly, posted the greatest profits ($1.8 billion). The biggest loser was Veritas Software, but its net losses on paper do not reflect the business, which is in fact, profitable. Western Digital’s losses ($188 million) are far graver. Losses at StorageNetworks ($125 million) are easily explained by the fact that the start-up company is naturally still in a massive investment phase.

The activities of certain companies in this table, of course, are not limited to storage. This is true, for example, of EMC with its Aviion computer business (which only accounted for $580 million of revenues, down 40% from 1999), or Imation, which is also in imaging, etc. In such cases, the companies’ total sales are given.

Not listed here, however, are those manufacturers for which storage is not the principal activity, and which did not break out figures for storage business alone: this is true, for example, for US giant computer manufacturers Compaq (S5.6 billion’), Dell Computer ($1.1 billion), Hewlett-Packard ($2.8 billion), IBM ($3.6 billion), Sun Microsystems ($3.3 billion), as well as the Korean firm Samsung, and Japanese manufacturers Fujitsu, Hitachi, Matsushita, Mitsubishi/ Verbatim and Toshiba.

LSI Logic, ranked 7th last year, posed a special problem. Chips for storage devices now account for only a portion of their business, which wasn’t always the case. Furthermore, with the acquisition of C-Cube, this is only going to be more true in the future. Given that the firm doesn’t break out its storage figures, we have decided not to include it. Total sales would have ranked it 4th.

Since 1999, we’ve seen the disappearance of Applied Magnetics (ranked 51st in 1999), Stac Software (60th), Ancor Communications (61st, acquired by QLogic), and Pinnacle Micro (63rd). Zygo (42nd), which has diversified heavily in the telecom arena, is also no longer listed. 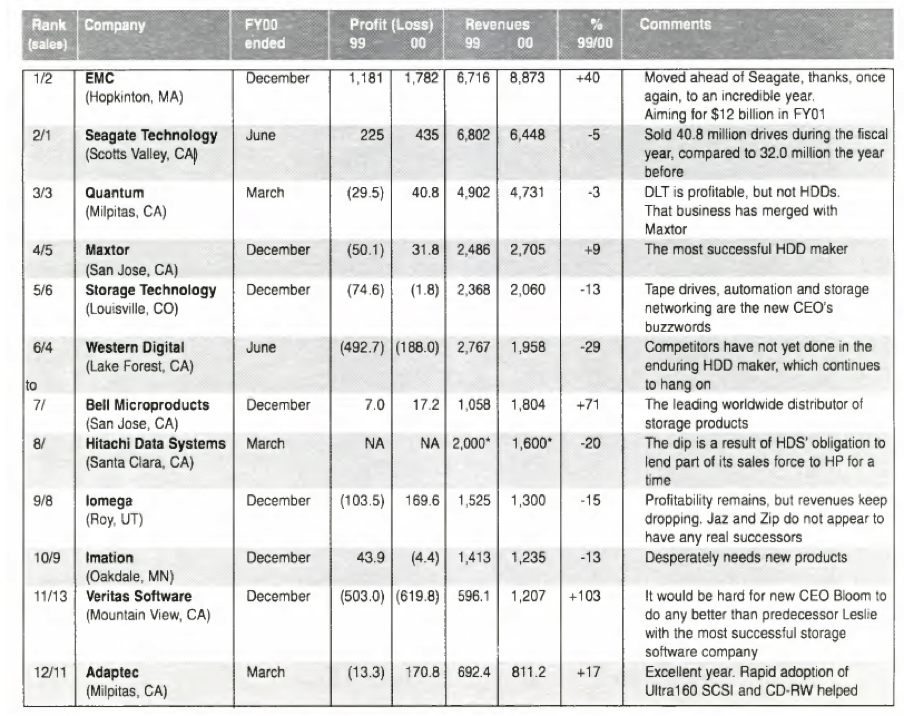 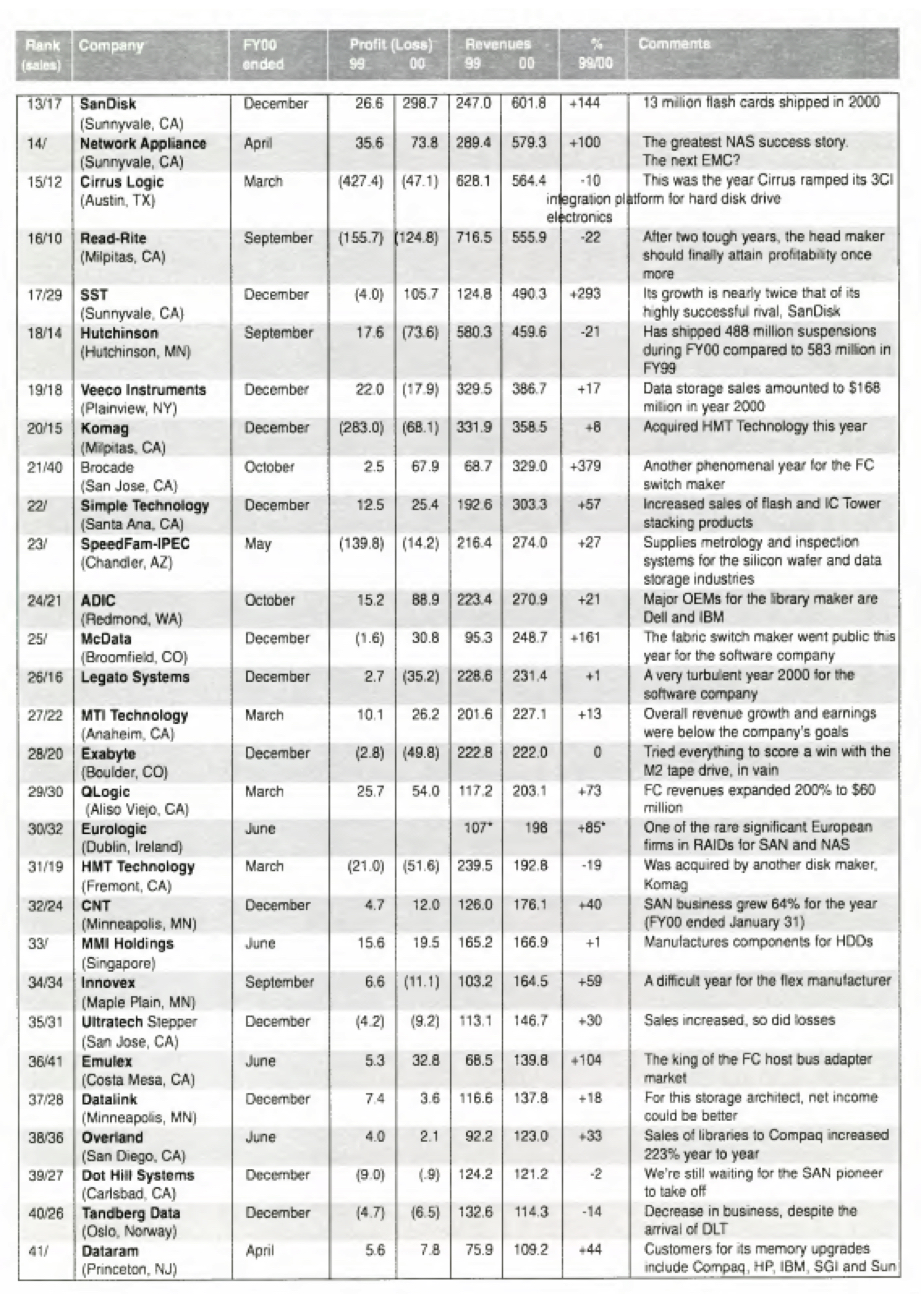 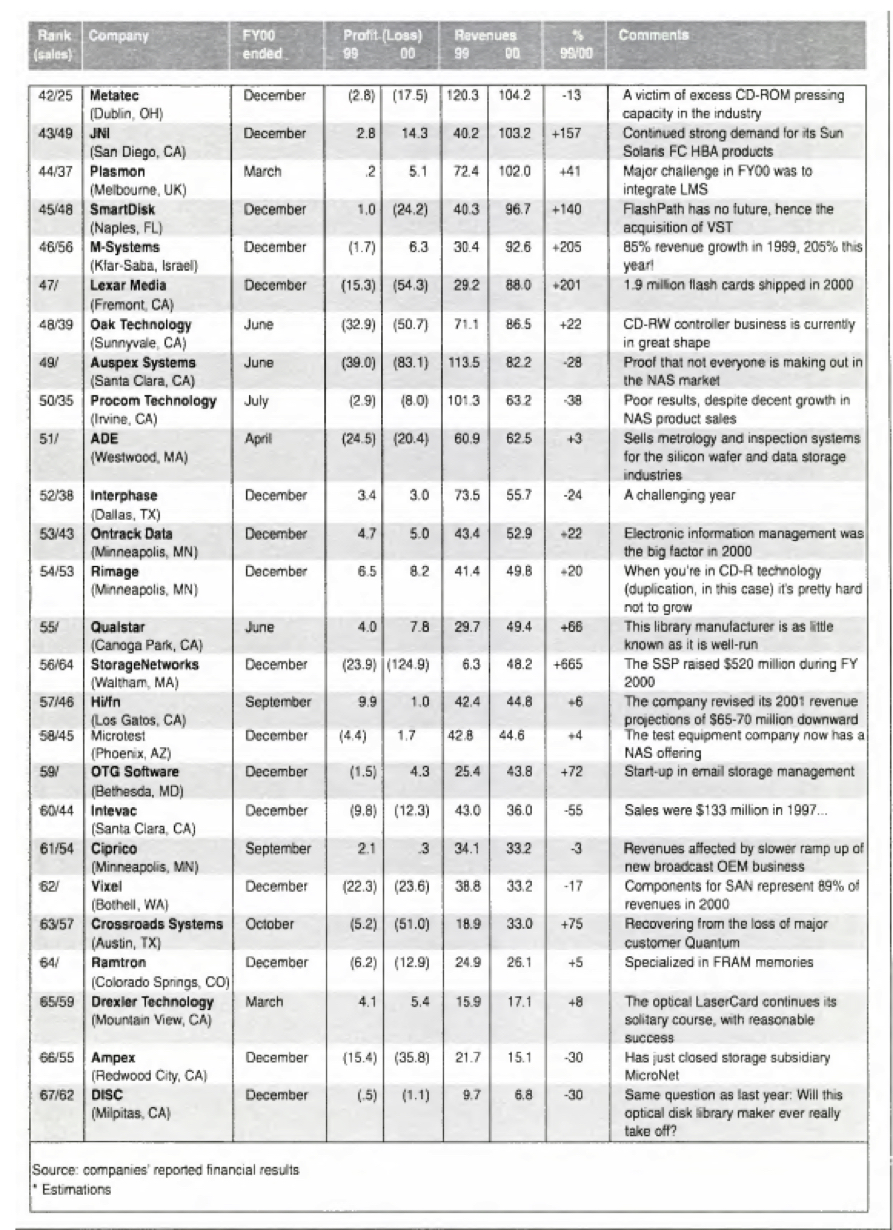 This article is an abstract of news published on issue 159 on April 2001 from the former paper version of Computer Data Storage Newsletter.