OSNexus Corp. announced the QuantaStor 6.0 delivering the latest in software-defined technology and support. 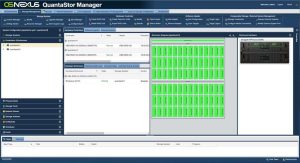 “QuantaStor 6 brings over 150 product improvements, making it one of our most comprehensive releases to date,” said Steven Umbehocker, CEO. “Customers and VAR partners have been really pleased with the many improvements in performance, usability, and hardware coverage that version 6 brings.”

Resource:
Try QuantaStor for free to get the platform software and license key.