About 40 years ago, the first PCs were equipped with HDDs – large drives that had a storage capacity of just 20MB.

However, the technology shrank rapidly in terms of physical size, while storage capacities grew. The very smallest models have since disappeared from the market, but the demand for ever-increasing capacity continues unabated. Current HDDs can hold up to 20TB – a million times as much memory as those early PCs.

The history of the HDD goes back to the 1950s. Even the drives of that time share their base technology with today’s models – rotating magnetic discs between which arms with R/W heads move and magnetize or scan bits. The first HDDs (IBM Ramac) were like small cabinets and weighed almost a ton. They were used in selected computer and mainframe systems and revolutionized data processing, because more immediate access to information was suddenly possible.

The triumph of the HDD began in the 1980s with the advent of PCs. The drives measured 5.25 inches in diameter and held only a few megabytes of data at the time – more storage was not necessary, because applications had no GUIs, and no document scans, digital videos or other storage-hungry data needed to be stored. The 20MB models were very popular, and many users started the PC era with them.

A HDD model from 1984 that stores 20MB. At that time, the drives were increasingly being installed in PCs, but at 5.25 inches they were still much larger than today’s HDDs. The interfaces were also not yet standardised – PATA came later. 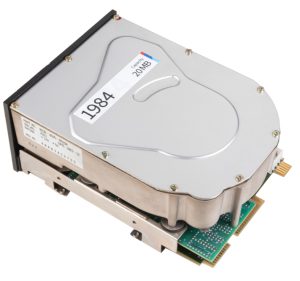 In the years that followed, storage capacities rose into the triple-digit megabyte range and interfaces were standardized. For power supply, the Molex connector with 4 pins prevailed; for data transfer, ATA became the standard. This standard was previously known as IDE, and with the introduction of SATA, it was usually referred to as Parallel ATA (PATA) for better differentiation. Typical of PATA were the ribbon cables with 3 40-pin connectors that connected 2 drives to the main board of the computer. By means of small plug-in jumpers on special contact points on the HDDs, it was determined which drive was the primary and which was the secondary.

In the mid-2000s, the new recording method PMR caused enormous leaps in capacity. HDDs could suddenly hold well over 100GB. The high data volumes made new interfaces necessary: SATA replaced PATA in the client area and SAS followed SCSI in the data centre. 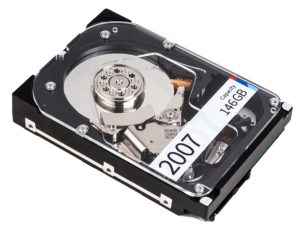 The boom that the new storage technology triggered is shown by the fact that there were 75 HDD manufacturers in 1985. Over time, more than 200 companies tried to produce the drives, of which only 3 are still active today (Seagate, Toshiba and WD). Consolidation began in the second half of the 1980s, as production was only economically attractive with large quantities.

HDD sizes keep getting smaller
The 3.5-inch HDDs became widespread from the end of the 1980s; the form factor was based on the size of floppy disk drives in order to fit into the same drive bays. In servers and storage systems, too, the 3.5-inch form factor quickly became the standard – and it still is today.

At the end of the 1980s, 3.5-inch drives became popular; here is a model from 1994 with 850MB. The form factor is still standard in PCs, servers and storage systems today. 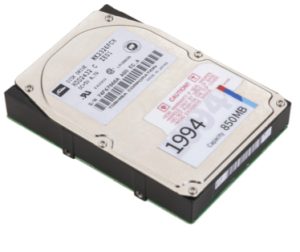 However, manufacturers also developed ever smaller form factors, starting with 2.5-inch HDDs for notebooks. Today, these models are really only found in external USB drives, as SSDs are more usually used in notebook computers. Particularly in low-cost devices, manufacturers only install low-capacity SSDs for cost reasons, so the demand for external HDDs as storage expansion remains high. However, the drives are hardly being developed further technologically, so no significant increases in capacity are to be expected.

The increasing demand for notebooks led to a boom in 2.5-inch HDDs, and in the mid-1990s the gigabyte limit was passed. Since mobile computers are now mainly equipped with SSDs, 2.5-inch drives are now used almost exclusively in external USB enclosures. 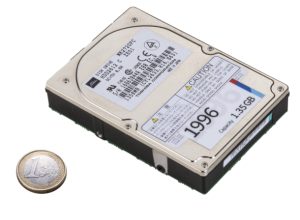 A lower limit was reached, and the very smallest HDD models have now disappeared completely from the market. However, around the turn of the millennium, for example, there were 1.8-inch HDDs for the PCMCIA slot of notebooks. Since the devices usually had neither an internal modem nor a network connection or WLAN and the connection to the outside world also required a plug-in card, notebook owners at the time had to make difficult decisions. In 2001, the first iPod also had a HDD – a model with a 1.8-inch format and 5GB of storage capacity, while the audio player competition relied on 2.5-inch disks.

The audio players, digital cameras and smartphones that emerged at the end of the 1990s were initially equipped with HDDs – flash memory was far too expensive at that time. Manufacturers developed HDDs with 1.8 inches, 1 inch and also this tiny one from 2004, which measures only 0.85 inches and holds 4GB.

This flat 1.8-inch HDD from 2009 is equipped with a single magnetic disk that can store 320GB and is used in compact notebooks, among other things. 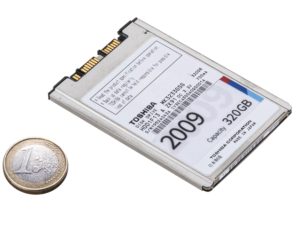 Because flash memory was expensive and memory cards only had small capacities, 1-inch disks were also developed that could fit into the CompactFlash slot of digital cameras. HDDs hardly bigger than a thumbnail were found in some smartphones at the beginning of the 2000s. Some of these 0.85-inch models held an impressive 4GB. However, they did not get any smaller, as flash outstripped the HDD in mobile devices.

Flash is displacing HDDs from many devices, so HDDs can only succeed with large capacities. The drives broke the terabyte barrier in the early 2010s, catching the rapidly swelling data wave of the information age in data centres and cloud environments. 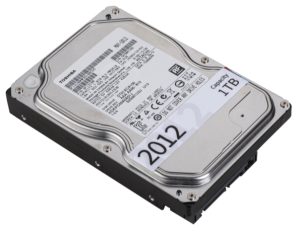 Storage capacity goes up and up
The flash boom meant that HDDs could only succeed with high capacities at favorable costs. Perpendicular magnetic recording (PMR), a new recording method, led to a real leap in capacity. Until the mid-2000s, the drives only held a few gigabytes, but shortly after that more than 100GB and soon even 1TB became completely normal.

With the previously used longitudinal magnetic recording (LMR), the bits on the magnetic discs were aligned horizontally, whereas PMR allowed a vertical arrangement and thus a much higher storage density. The big challenge here was the positioning of the magnetic poles on the recording head, as the magnetization had to take place through the disk, but the recording head could not be built around it. The solution was ultimately a reflecting and scattering layer underneath the disc, which led the magnetic flux back to the second pole located above.

The increasing storage capacities made new, serial interfaces with a higher throughput necessary: in the client area the already-mentioned SATA, and in the data center area SAS, which replaced SCSI. In the data centers, SSDs subsequently began to displace the fast-spinning HDDs with 10,000 and 15,000rpm more and more – and what remained were 3.5-inch HDDs with 7,200rpm, which offer an optimal balance of capacity and performance. They were filled with helium from the mid-2010s. This lightweight inert gas causes less friction and turbulence than air, so using thinner discs created space for additional discs in the enclosure. With 9 discs and PMR, 16TB could be realized. Ten and more discs seem possible, and further increases in capacity can be realized with alternative recording technologies.

A new gen of HDDs with microwave technology
With microwave-assisted magnetic recording (MAMR), a new recording method has been developed in recent years that uses microwaves to control and focus the magnetic flux at the write head. This means that less energy is needed to magnetize the bits, so that the recording head is smaller and can write data more densely. Toshiba launched HDDs last year that featured a new form of MAMR, called flux-controlled MAMR (FC-MAMR). This technology has boosted storage capacity and enhanced power efficiency. Building on the great market response that these drives received, the MG10 Series was released a few weeks ago. These advanced HDDs, with a 10-disk helium-sealed design, push capacity values still further. This allows them to store 20TB of data, while still keeping to the 3.5-inch form factor.

In 2021, a new gen of HDDs entered the scene, relying on the new MAMR. The first model had a capacity of 18TB, and its successor in 2022 has already brought it to 20TB. 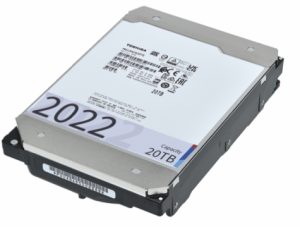 In the next development stage, microwave-assisted switching MAMR (MAS-MAMR), the microwaves will activate the material of the magnetic discs to further reduce energy input and enable a further reduction in the size of the write head. However, this will require a new coating for the disks, which the HDD manufacturers are currently developing. According to experts, MAS-MAMR will increase the capacity of 3.5-inch HDDs to up to 50TB in the next few years. This sets the course for HDDs to continue to bear the brunt of storage in the information age.

However, it seems unlikely that the next 40 years will see another leap in capacity like the one from 20MB to 20TB. HDDs in the early 2040s would then have to offer 20EB of storage capacity – 10x that of a modern cloud data center. On the other hand, the proud owner of a 20MB HDD in the early 1980s probably never dreamed of models with 20TB.