Matsushita Kotobuki Electronics has developed a technology called FD32MB, which allows the user to place an ordinary 1.44MB floppy diskette in its SuperDisk drive, and to record 32MB of data, or 23x the normal capacity. 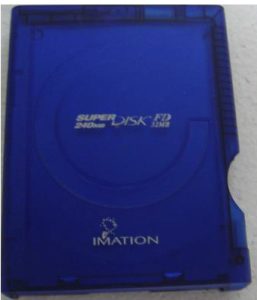 FD32MB increases the number of tracks from 80 to 777, and uses PRML and zone bit recording.

This new technology should be integrated in all 120/240MB SuperDisks for OEMs starting this month, while an external USB version is slated for February 2001.

Production at a scale of 50,000 units monthly is planned for next year.

Parent company Matsushita Electric Industrial had already launched a digital camera last January, the LK-RQ132S ($1,095), which integrates a 120MB SuperDisk for memory. The firm has now unveiled a new model, the Super D-Cam LK-RRQ334S, for a similar price, still with the same floppy drive. This time, planned production is 1,000 units per month.

This article is an abstract of news published on issue 154 on November 2000 from the former paper version of Computer Data Storage Newsletter.