By Philippe Nicolas, organizer of The IT Press Tour

The recent 45th edition of The IT Press Tour organized for the first time in Paris, France, was the opportunity to meet 6 companies, 5 from Europe and 1 from USA: Biomemory Labs from France, DataCore from USA, Nodeum from Belgium, PoINT Software & Systems from Germany, Storadera from Estonia and StorPool from Bulgaria.

Biomemory Labs
The French company session was amazing. It was about the development of a DNA storage entity based on synthetic biology to leverage the DNA properties for long term information preservation. The presentation was driven by Pierre Crozet, CTO and co-founder, but also associate professor at Sorbonne Université. The management team is composed of Erfane Arwani, CEO, and Christophe Lemaire, CSO and also research director at CNRS in France in addition of Crozet. The company has the mission to develop a DNA drive and introduced the concept of WORN – Write Once Read Never – with the goal to be a complement of current technologies and media and potentially replace them when it will be ready. As mentioned, the application is for cold storage. The technology uses a different alphabet with 4 letters A, C, T and G for data encoding with an incredible density of 50 atoms/letter that means that 45ZB can be represented by just a chocolate bar of 100g. The 2 others phases – synthesize and sequencing – takes times to day especially the “writing” phase. Beyond obvious properties like energy savings as a passive entity, size and density, the number of copies are potentially infinite. One of the key element is that the information and the media are the DNA which is different from a classic storage entity where information and media are 2 decoupled notions. The industry understand that this development is a serious direction having established the DNS Data Storage Alliance now affiliated to the SNIA with usual software and storage hardware suspects but also several key players in this DNA development. Beyond the DNA drive demonstration made a few months ago, Biomemory thinks 2030 as a reasonable target with the mission to release a 4U server. 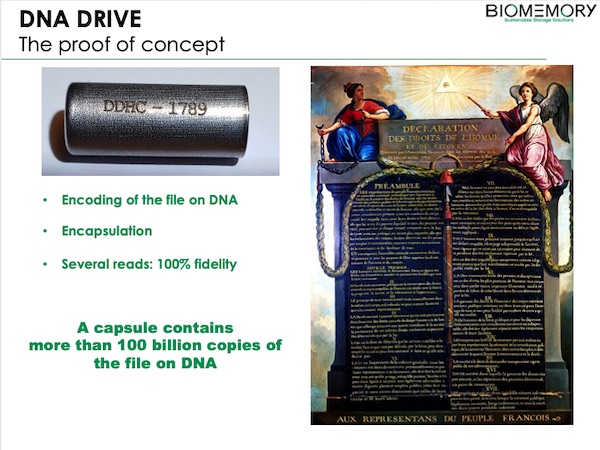 DataCore
Reference in SDS, one of the pioneer of storage virtualization at the golden age of SAN, it shares its updated vision named DataCore NEXT, its Edge Computing initiative, the new Swarm version, its Perifery flavor and the partnership with Symply. Dave Zabrowski, CEO, has insisted on the new direction for the company with storage and processing at the edge representing a real new business opportunity for the industry and especially DataCore with Swarm incarnation as Perifery. The company enters into this segment with selected partners and delivers ready-to-use appliances built by these partners and fed with several software on the platform to address key verticals such healthcare or media and entertainment today. In this M&E domain, DataCore picks Symply to deliver the first appliance dedicated to media archiving. In this new strategy, valid for the next 3 years, Core to Edge to Cloud is supported by the block SDS SANsymphony, the object storage Swarm and the storage management software dedicated to Kubernetes Bolt. Since Zabrowski joined DataCore almost 5 years ago, the trajectory of the company has changed from a one product company to a real portfolio addressing block, file, object and cloud-native applications. We anticipate an exit from DataCore, it could be an acquisition with players like HPE or with a private equity firm, with the information that Insight Venture Partners is an investor in DataCore since 2008. 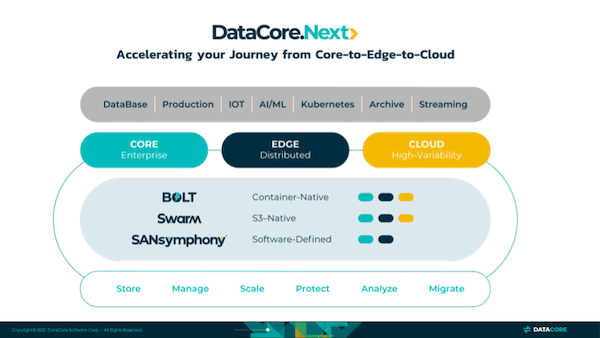 Nodeum
The Belgium company plays in the data management space with some interesting developments. The team leverages its users expertise to address new challenges in data migration, data protection and data archiving for unstructured data at scale. Having said that, the heart of Nodeum is a fast scalable data mover to build comprehensive workflows. The solution supports any source and target, source such NAS and S3, private or public object storage, and even Swift and targets like S3, Swift again and tape storage. The firm exposes a single namespace across the devices and medias especially on top of object and tape storage. Nodeum’s solution appears to be a universal answer offering an open API to address various use cases in media and entertainment, geo-spatial, healthcare and especially genomics and also university and research centers. Illustrated with various success stories, we understand that Nodeum is chosen for special workflows with deep data tracking during data movement across multiple divers sources and targets. They partner with 2 vendors, Quantum and DataCore, Quantum to provide them the S3 to tape access layer and DataCore as they use Swarm. The team plans to introduce a new architecture in a few months to sustain rapid adoption and new data volumes challenges a large scale in new verticals such banking and HPC. 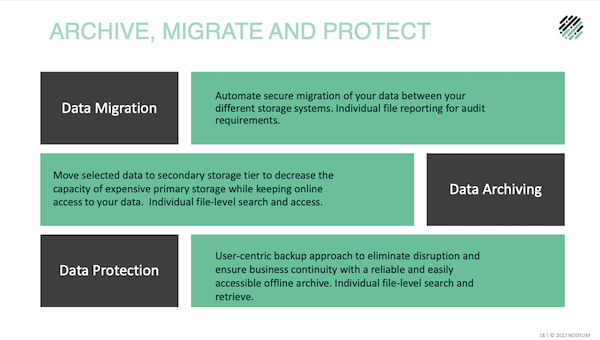 PoINT Software & Systems
The German company is a pioneer in the open systems space for unstructured data management with almost thirty years of existence. Being a bit confidential, it is recognized for its expertise in the domain with Storage Manager, a pretty classic but comprehensive file tiering and archiving product capitalizing on the HSM concept but also for its Archival Gateway product being an universal model for data preservation using tape to store data and S3 for the access. Storage Manager has several hundreds installations WW and runs already in large data centers. The team has also developed Data Replicator to couple with the latter and provide file to S3 or S3 to S3 copy mechanism. All these products are software only and support a large source and target medias, devices and systems. Thomas Thalmann, CEO announced its unified object storage (UOS), a new extension to the archival gateway. Beyond the S3 to tape, who some people call a modern VTL, UOS adds a disk back-end and a single namespace between the two entities. Disk and tape reside at the same level but data movement between these 2 is also possible and we can imagine some subtle data lifecycle policies around move/copy or tier operations. This confirms a real market trend with 8 players in that S3 to tape category with Fujifilm, Nodeum, PoINT Software & Systems, Quantum, QStar, Spectra Logic, StrongLink and XenData. 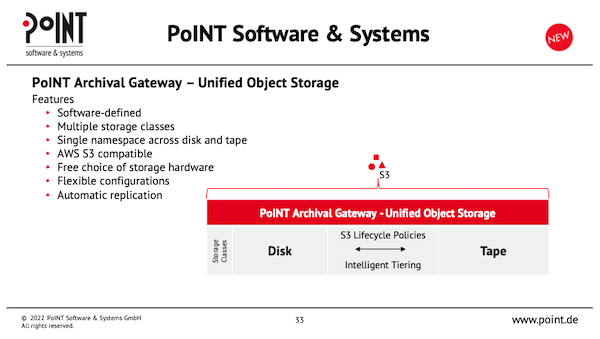 Storadera
The Estonian company is on a mission: to attack the empire built and controlled by AWS, GCP or Azure i.e the cloud storage landscape. Starting very recently in Talinn, Estonia, with limited funding, Storadera offers online storage space with a compatible S3 API, but the key aspect is the pricing model. The service is promoted as a predictable model with a flat fee per capacity per month without any cost for traffic whatever you do, no threshold on that aspect, the price ignores I/O operations. It is charged at €6/TB/month. Data is protected by erasure coding and today only one region and one availability zone (AZ) exist, they plan to add a data center in Netherlands and Germany in the coming months thus growing the region with 3 AZs. The traffic is encrypted and data at-rest as well to fully prevent any data interpretation. The company claims to be the cheapest S3 storage even with Wasabi or Backblaze B2. So far numbers are small in terms of capacity and customers but it is growing, the challenge being more to gain visibility than attracting users. Margus Danil, COO, confirmed that they don’t rely on open source software or tools and everything was developed in house. In terms of use cases, they started with a pretty classic data protection approach, being a target for some established solutions such Altaro, Comet, Cyberduck, Duplicati, MSP360 aka CloudBerry, Nakivo, Rclone, Synology Hyper Backup or Veeam. But clearly the fact that traffic cost zero also invite them to address other traffic intensive use cases. 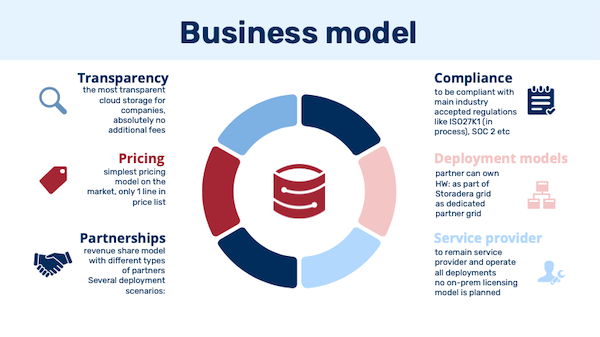 StorPool
The Bulgarian company belongs to the small group of pure SDS players and offers a block interface. By pure, we mean the total absence of special NIC, board, RAID controller, NVDIMM, DPU… And this is what SDS has originally promised, take a set of x86 servers with internal disks, HDD or SSD or both, with a Linux distribution connected to an Ethernet network and install StorPool software. Then you just need to configure the cluster to offer pools of storage by logical aggregation for internal disk across systems. The result is exposed outside via iSCSI or with a driver installed on the application machines. This is what the firm does for many years as it was founded in 2011. The company supports high demanding workloads delivering 1 milion IO/s per node at 70μs latency and performance is very linear. The latency offered by a cluster reaches 1.5x the local NVMe latency. Being profitable with an interesting growth in various industries for this alternative primary storage model, the team has announced recently 3 new key features: the support of NVMe/TCP, NAS flavor with NFS and AWS support. The NVMe/TCP support is fully software and invites StorPool in the group of NVMe/TCP vendors with Lightbits Labs, Fungible, Pavilion Data, Smart IOPS among others in addition to the big storage irons. The file interface support with first NFS was a surprise but confirms the business opportunity. The first iteration offers 50TB per server working in active/passive mode. StorPool on AWS demonstrates that even vs. specific AWS AMI and associated storage, this SDS approach makes really sense and delivers impressive results. 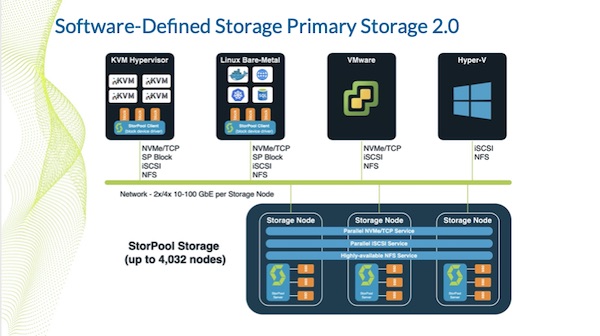