A unicorn is a private company with a $1 billion valuation minimum. It includes firms belonging to private equity firms such Veeam, Barracuda Networks or Veritas Technologies for instance, some of them have quit the public quotation marketplace.

We see same core of players and have expected a possible change when Cohesity filled confidentially its S1 in December 2021. We’ll see if it will be confirmed now with its new CEO. Others strengthen their positions like Kaseya with the acquisition of Datto or Nasuni with DBM Cloud Systems and Storage Made Easy.

The new entrant is MinIO who raised $103 million in January in an oversubscribed round passing the billion dollar valuation. Ranked among leaders in various analyst reports, it became the most used and downloaded object storage software on the planet.

17 is significant but reflects pretty well the health of the storage industry with several fast growing companies in file storage, cloud storage and data protection. Some of them will continue their impressive trajectory potentially becoming a decacorn soon or choose the IPO path, for others it takes more time… 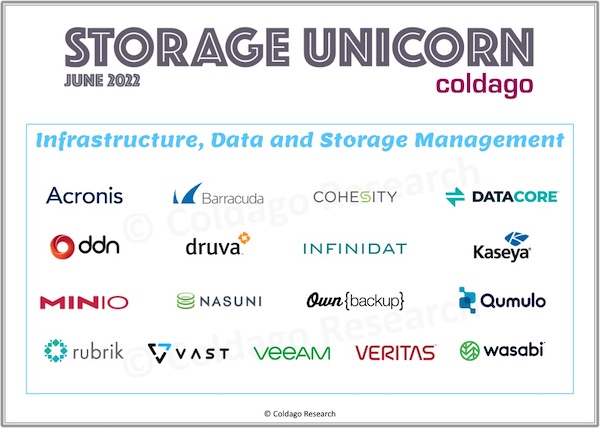