Increases in HDD areal density is becoming a nearly monthly feature in our newsletter, and demo technologies are coming at an ever faster rate.

At this density, optical technology has its work cut out for it to keep up. The equivalent capacity of a DVD-ROM can be stored on one square inch of IBM’s new magnetic platter. We can thus look forward to HDDs with 50GB per 3.5-inch disk or 20GB per 2-inch platter or even 1GB in a one-inch Microdrive unit.

This density is 3x greater than what is found today on the most recently announced units.

To get there, IBM revealed, without further precision, the company relied on a new proprietary metal-alloy coating on the hard disk platter that “exhibits product-quality stability, not the data-robbing fluctuations that had been feared to be present at such high densities.”

According to the company, lab results also suggest that even smaller bits on this media will continue to be stable, enabling a clear path to even higher areal densities in the future.

Other technical details of IBM’s demo: narrow-track thin-film inductive write head, advanced GMR reading head, advanced PRML, 522,000bpi, 67,300tpi with an off-track capability of 15% of the track pitch, data rate of 18MB/s when reading or writing, uncorrect reading rate of less than one error in 100 million bits (which, in products, would be reduced even further by ECC to less than one in a trillion, according to IBM). 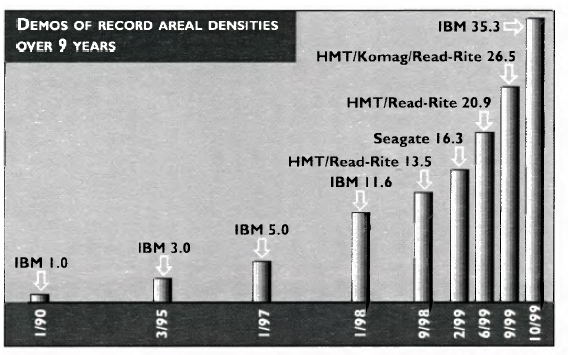 This article is an abstract of news published on issue 141 on October 1999 from the former paper version of Computer Data Storage Newsletter.