According to TrendForce, Inc.‘s research, despite the significance of peak season and rising DDR5 penetration, the 3Q22 DRAM market still succumbed to the negative impact of weak consumer electronics demand resulting from the Russian-Ukrainian war and high inflation, which in turn led to an increase in overall DRAM inventory. This is the primary reason for a 3-8% drop in DRAM prices in 3Q22 and a more than 8% pricing dip in certain DRAM products for PCs and smart phones cannot be ruled out. 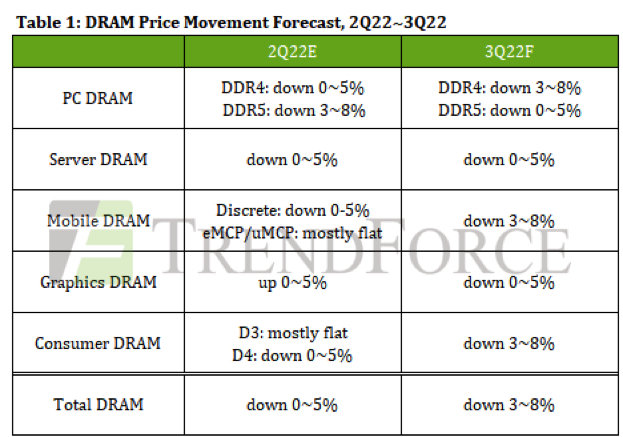 In terms of PC DRAM, sustained weakening of demand has led to PC OEMs adjusting their annual shipment targets and also caused DRAM inventories to soar rapidly. In 3Q22, PC OEMs remain focused on adjusting and destocking DRAM inventories, making a rebound in purchasing momentum unlikely. At the same time, since the overall DRAM industry remains oversupplied, even if PC demand is sluggish, suppliers still experienced difficulties in reducing their PC DRAM supply, resulting in a slight quarterly increase in the number of supplied bits. Therefore, PC DRAM pricing is forecast to drop by 3~8%.

In terms of server DRAM, current client inventory levels of 7-8 weeks is slightly high, and though direct sales is currently the server field’s primary distribution channel, clients’ bit demand is still not enough to fully consume the bit output derived from increased wafer input and process advancement. In addition, demand for consumer PC DRAM and mobile DRAM is uncertain in 2H22, forcing suppliers to transfer production capacity to server DRAM. As a result, suppliers have to adopt certain sales strategies such as two quarter price binding or increasing on hand inventory to suppress price declines. Server DRAM is forecast to drop by another 0~5% in 3Q22.

In terms of mobile DRAM, as sales in the consumer market fail to meet expectations, suppliers are forced to incrementally reduce the proportion of mobile DRAM production quarter by quarter and switch to server DRAM, thereby stabilizing market inventory and prices. However, the supply of mobile DRAM bits did not drop significantly due to the increased manufacturing. In addition, average memory installed per machine failed to increase significantly, resulting in continued oversupply and expanding price decline to 3~8% compared to 2Q22. Bit shipments were limited due to sluggish demand for smartphones in 2Q22 and the urgency of smartphone brands to deplete inventory. Under pressure from both revenue and inventory, pricing will see greater flexibility and suppliers will strive to negotiate pricing on some orders before the end of June to alleviate their inventory concerns.

In terms of graphics DRAM, as buyers face increasing inventory and uncertain subsequent demand from distributors, the market’s stocking momentum has become weak. Although Micron only retained a sporadic supply of GDDR6 8Gb in 3Q22, the current graphics DRAM supply is secure due to increased production volume from Korean manufacturers and the weakening of demand, which caused prices to drop marginally by 0~5% in 3Q22. Weak demand is a key inhibitor of rising graphics DRAM pricing this quarter. However, if suppliers see that a price drop in 3Q22 will not stimulate demand, they will try to keep prices as flat as possible.

In terms of consumer DRAM, the purchasing of consumer electronics has been adversely affected by factors such as the Russian-Ukrainian war, China’s pandemic lockdowns, and rising inflation. Consumer DRAM-related applications such as notebook and TV shipments are facing downward revision. In addition, since DDR3 is at a relatively high point, pressured by inventory and cost, buyers’ purchasing power has obviously weakened. Demand for DDR3 and DDR4 is forecast to decline simultaneously and market stocking momentum will continue to weaken. Korean manufacturers’ plans to withdraw from DDR3 supply remains unchanged but, in 2H22, Chinese and Taiwanese companies will continue to create new production capacity. With weaker demand and increased supply, sellers lose their bargaining advantage, making consumer DRAM prices difficult to support in 3Q22. DDR3 and DDR4 prices are forecast to drop by 3-8% Q/Q.