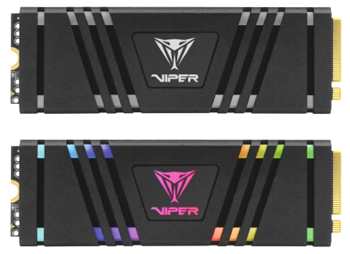 An aluminum heat spreader has been included to keep the drive thermally stable while accenting the onboard RGB LEDs. This SSD is built using the Innogrit IG5220 Gen4x4 controller along with 3D NAND memory chips, allowing the drive to provide the 4K aligned random read and write speeds up to 600,000 and 500,000 IO/s and sequential RW speeds up to 4,600MB/s and 4,400MB/s (1TB model). Available in capacities of 1TB and 512GB.

“The Viper VPR400 has been crafted to deliver blazing speeds and performance for intense Gaming and video content creation. Viper understands that keeping high-speed SSDs thermally stable is the key to maintaining the storage unit’s performance and longevity. ” said Roger Shinmoto, VP.

Onboard RGB is synchronizable with other company’s RGB peripherals using the smart Viper RGB 3.0 software, allowing users to customize their lighting profiles or choose any pre-programmed RGB lighting patterns.

The Viper VRP400 SSD is different from the traditional NVMe SSDs, which set performance restrictions that limit RW data transfer speeds to maintain a workable operating temperature. Instead, it supports the Thermal Throttling technology using a built-in thermal sensor and firmware to wisely manage the SSD operational performance and temperature. This technology can prevent overheating while efficiently commanding the best performance under dynamic conditions.

Backed by the company’s 5-year warranty, the Viper VPR400 RGB M.2 Gen 4×4 SSD is for gamers and video content creators who require fast bootup speeds and instantaneous access to files for productivity.

The Viper VPR400 will be available in late June at Amazon, Newegg, and more major retailers. 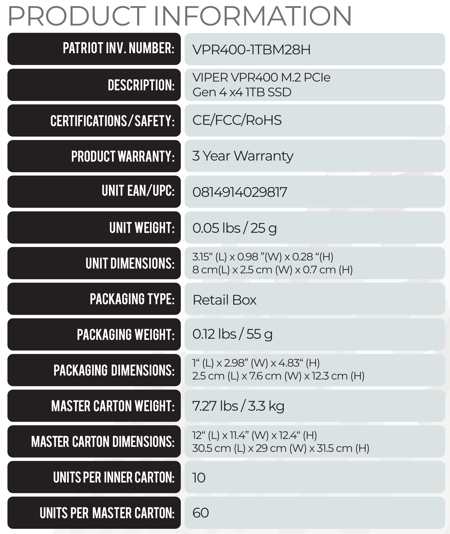