Infinidat Ltd and several other major IT and storage vendors are putting aside their competitive rivalry for a joint effort to “tackle” cancer together in a charity event for the Tech Tackles Cancer program. 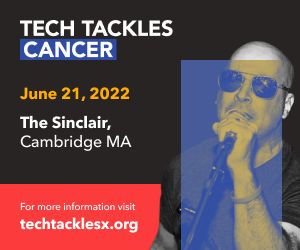 The purpose of the storage industry coming together in Boston, MA, to rock ‘n roll for a sizzling night of music in June is to raise awareness and funds supporting pediatric cancer treatment and research.

Leveraging the power of the Boston tech industry, Tech Tackles Cancer, a non-profit initiative, will bring together vendors in a “Battle of the Technology Rockstars” on June 21 at The Sinclair in Cambridge, MA to strike a unified chord for a humanitarian cause.

One of the featured performers will be Ken Steinhardt, field CTO at Infinidat, which is one of multiple storage solution providers supporting this fundraising effort. His band The Brothers Project will also be performing a set after the singing competition. The cause is personal for him because he has had close friends and direct family members affected by cancer. He is running a personal fundraising campaign that will benefit this charity, culminating in his performance at the live band karaoke competition at The Sinclair.

“Tech Tackles Cancer is a cause for which I have strong affinity. To do something for such a good cause and mix it with some good rock music, it doesn’t get any better,” said Steinhardt. “I am encouraged by how so many tech companies have responded to this cause, saying ‘I’m on board. How can I help?’ The attitude across the industry has been amazing. It’s a beautiful thing when we’re collaborating for the right reasons.“

On stage, he will be going up vs. Nathan Hall, VP of engineering, Pure Storage; Steve Duplessie, founder and senior analyst of Enterprise Strategy Group/Tech Target; George Hope, WW of partner sales, HPE; Chris Lynch, and a dozen of other technology executives – or “rockstars” from the industry – for a fun night with feel-good rhythms, shining a spotlight on the storage industry.

At the June 21 charity event, the live audience and spectators watching the performances via LinkedIn Live will be able to vote for their favorite performances. Now in its 6th year, Tech Tackles Cancer is returning to an in-person event after a hiatus of more than 2 years due to the Covid pandemic.

Since 2012, Tech Tackles Cancer has raised more than $2 million in donations for organizations focused on pediatric cancer treatment and research, including St. Baldrick’s and One Mission.  This year, the goal is to raise over $300,000 for pediatric cancer-related causes.

Infinidat is involved as a platinum sponsor and has a seat on the volunteer-led team that oversees and plans the organization’s activities. Serving on the executive committee of Tech Tackles Cancer is Dan Pearl, senior director, sales strategy and enablement, Infinidat.