The demonstration confirms that the technology delivers substantial storage capacity gains, and the company aims to realize early commercialization of nearline HDDs with capacities exceeding 30TB.

Tthe firm is placing R&D effort on MAMR, a technology that boosts HDD recording density. In 2021, the company started shipment of 18TB HDDs that apply Flux Control MAMR (FC-MAMR) (2), which uses spin torque oscillators to assist recording. MAS-MAMR is expected to improve recording density beyond that of FC-MAMR by locally exposing microwave to -recording media. However, this was not shown to be possible in practice until the recent demo. 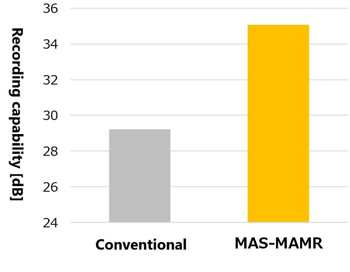 Toward proving the superiority of MAS-MAMR, Toshiba has been promoting its development with Showa Denko K.K., an HDD medium manufacturer, and TDK Corporation, a HDD head manufacturer. This 3-way cooperation recently bore fruit in the demonstration of MAS-MAMR’s improved recording performance.

Toshiba will announce details of the newly developed spin torque oscillator and its oscillation characteristics at the Joint MMM-INTERMAG Conference 2022, an international conference scheduled on January 10-14, 2022.

Development background
Digital storage on data centers is a pillar of the modern information infrastructure supporting digitalization and digital transformation, and is now more important due to the Covid-19 pandemic. Continuing storage demand is on pace, and the market for high-capacity nearline HDDs, the workhorses of both cloud-scale and traditional data centers, is expected to grow to $ 17.5 billion in 2025 (3). This evolving needs for storage devices are also fueling demand for further capacity increases in HDDs.

Advances are being made in R&D of a next-gen magnetic recording technology to overcome this trilemma. While MAS-MAMR to assist using microwaves is expected to improve the recording density drastically in theory, the confirmation of microwave-assisted switching effect (MAS-MAMR effect) on recording condition and improved recording performance with MAS-MAMR have not yet been demonstrated.

Subsequently, Toshiba confirmed the MAS-MAMR effect by combining the newly developed STOs, recording heads and media, and for the first time demonstrated an approximately 6dB improvement in recording performance with MAS-MAMR (4). This technology makes it possible to realize HDDs with large capacity of over 30TB. By the demonstration, MAS-MAMR has taken a major step forward as a practical next-gen magnetic recording technology that can improve recording density.

The firm will also continue to develop the Thermal Assisted Magnetic Recording (TAMR) technology in parallel, to meet a range of storage needs.