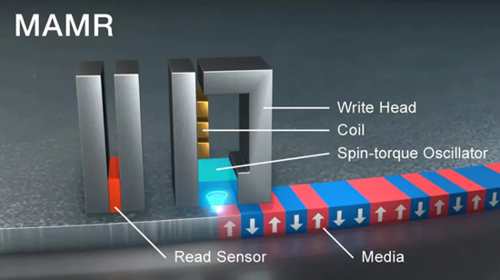 Showa Denko K.K. (SDK)produced the media for this technology in a 3-way collaboration geared towards advancing HDD capacity in the marketplace.

MAS-MAMR would constitute the 2nd gen Spin Torque assisted head for the recording industry, which is aimed for more than 24TB HDD. It utilizes the ferromagnetic coupled resonance effect from twin Spin Torque element layers inside the write head acting on the media recording layer, referred to as the MAS effect. In collaboration with Toshiba and SDK, TDK has demonstrated that the write-ability can be improved. TDK has been studying the optimal twin element structure that can be fitted into the write gap for MAS-MAMR. It is expected that this technology can be extended up to 30TB HDDs.