A pioneering type of patented computer memory known as ULTRARAM has been demonstrated on silicon wafers in what is a major step towards its large-scale manufacture.

ULTRARAM is a novel type of memory with extraordinary properties. It combines the non-volatility of a data storage memory, like flash, with the speed, energy-efficiency and endurance of a working memory, like DRAM. To do this, it utilises the properties of compound semiconductors, commonly used in photonic devices such as LEDS, laser diodes and infrared detectors, but not in digital electronics, which is the preserve of silicon.

Initially patented in USA, further patents on the technology are currently being progressed in key technology markets around the world.

Now, in a collaboration between the Physics and Engineering Departments, Lancaster University and the Department of Physics, Warwick University, ULTRARAM has been implemented on silicon wafers for the first time.

Professor Manus Hayne, Department of Physics, Lancaster University, who leads the work said: “ULTRARAM on silicon is a huge advance for our research, overcoming very significant materials challenges of large crystalline lattice mismatch, the change from elemental to compound semiconductor and differences in thermal contraction.”

Digital electronics, which is the core of all gadgetry from smart watches and smart phones through to personal computers and datacentres, uses processor and memory chips made from the semiconductor element silicon.

Due to the maturity of the silicon chip-making industry and the multi-billion dollar cost of building chip factories, implementation of any digital electronic technology on silicon wafers is essential for its commercialisation.

The research is reported in the journal Advanced Electronic Materials. 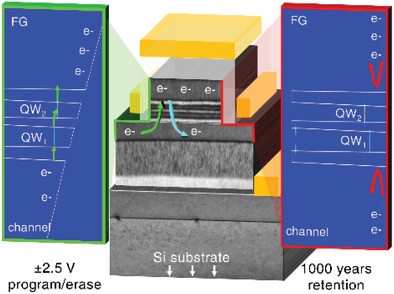 Abstract: “ULTRARAM is a nonvolatile memory with the potential to achieve fast, ultralow-energy electron storage in a floating gate accessed through a triple-barrier resonant tunneling heterostructure. Here its implementation is reported on a Si substrate; a vital step toward cost-effective mass production. Sample growth using molecular beam epitaxy commences with deposition of an AlSb nucleation layer to seed the growth of a GaSb buffer layer, followed by the III–V memory epilayers. Fabricated single-cell memories show clear 0/1 logic-state contrast after ≤10 ms duration program/erase pulses of ≈2.5 V, a remarkably fast switching speed for 10 and 20 µm devices. Furthermore, the combination of low voltage and small device capacitance per unit area results in a switching energy that is orders of magnitude lower than dynamic random access memory and flash, for a given cell size. Extended testing of devices reveals retention in excess of 1000 years and degradation-free endurance of over 107 program/erase cycles, surpassing very recent results for similar devices on GaAs substrates.“