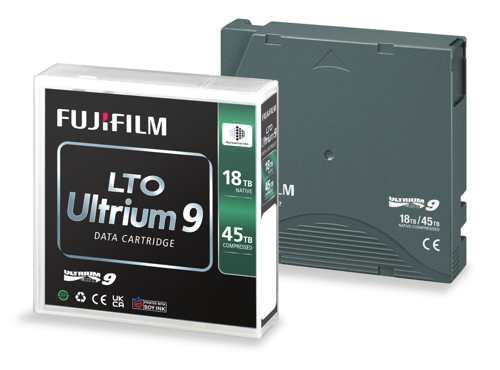 The company’s LTO-9 complies with the ninth generation LTO Ultrium (2) standards for magnetic tape storage media, marking a new standard of performance for backing up and archiving large volumes of data. The firm’s LTO-9 uses proprietary technology to offer up to 45TB of storage capacity (18TB for non-compressed data), a 50% increase from the previous generation of LTO tape (3).

Magnetic tape is recognized as a storage media for long term archival of high-volume data, safely at low-cost. In addition, tape has a lower environmental impact as there is no need to have it constantly powered-on during storage, thereby reducing CO² emissions generated during its lifecycle by 95% (4) when compared to HDDs.

Increased capacity meets growing data demands at lower cost
The amount of data generated worldwide has increased exponentially in recent years with the introduction of 5G networks, high-definition video, the IoT, AI and more. As much as 80% of all data is estimated to be ‘cold’ or rarely-accessed data that can be effectively and more economically moved to a tape storage tier, which offers the lowest TCO of any storage media.

Offline storage offers protection against cybercrime
Tape can be stored offline and off-network, creating a physical ‘air gap’ of protection to minimize the risk of data exposure to cyberattacks. Security for long-term storage of high-volume data has long made tape a preferred choice of major data centers and research institutes.

As the storage tape manufacturer of computer-use magnetic tapes with the leading top global market share (7).

LTO Ultrium 9 facts at a glance: