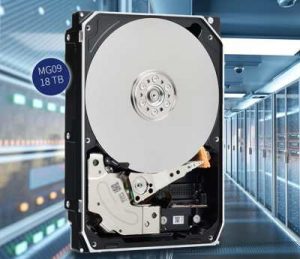 The MG09 Series is based on the firm‘s proprietary third-gen, 9-disk helium-sealed design and incorporates game-changing Flux Control – Microwave Assisted Magnetic Recording (FC-MAMR) technology. Thanks to these advances,CMR density has been raised to 2TB [1] per disk, thereby achieving a total capacity of 18TB.

With 12.5% more capacity than the previous 16TB models, the 18TB MG09 Series CMR drives are compatible with a wide range of applications and OSs. These drives are adapted to deal with mixed random and sequential R/W workloads for both cloud-scale and traditional data centre implementations. They deliver 7,200rpm performance, with a 550TB per year workload rating [2] and a choice of either SATA or SAS interfaces. All this has been packed into an industry-standard, power-efficient, helium-sealed 3.5-inch [3] form factor being supported.

The MG09 Series demonstrates the company‘s commitment to the continued progression of HDD design, andits ability to meet constantly evolving market needs for storage devices in cloud-scale servers, as well as ‘Object and File’ storage infrastructure deployments in general. Through enhanced power efficiency figures and leading capacity levels, these drives are set to enable heightened storage densities to be attained in cloud, hybrid-cloud and on-premises rack-scale operations. Reductions in the necessary Capex will thereby be witnessed, so the TCO can be kept to a minimum.

Sample shipments of 18TB MG09 Series HDDs to customers are expected to start sequentially at the end of March 2021. 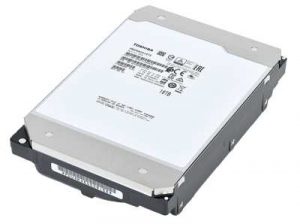 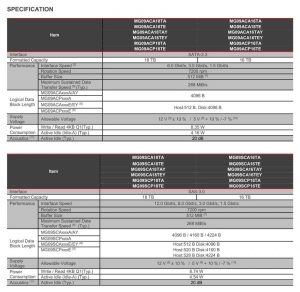 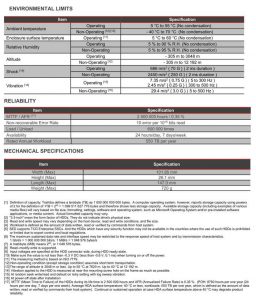 [1] Definition of capacity: 1TB=one trillion bytes, but storage capacity available may vary depending on operating environment and formatting. Available storage capacity (including examples of various media files) will vary based on file size, formatting, settings, software and OS and/or pre-installed software applications, or media content. Actual formatted capacity may vary.
[2] The workload is a measure of the data throughput in a year, and it is defined as the amount of data written, read or verified by commands from the host system.
[3] 3.5-inch means the form factor of HDDs. It does not indicate a drive’s physical size.