Spurred by the proliferation of mobile computers, WW sales of 1.8-inch HDDs and flash memory cards will grow by more than 6x from $2.2 billion in 1993 to $14.6 billion by 1999 at an over 35% compound annual rate, projects a new study: Worldwide Microdisk Drive and PCMCIA flash Memory Card Markets: Flash Encroaches on HDDs Even as Capacities Increase ($1,995) released by Frost & Sullivan (Mountain View, CA).

Flash cards will expand their share of the mobile storage media market from 19% of revenues in 1993 to 36% by 1999 as 1.8-inch drives likewise grow from 9 to 24% in the same period while currently dominant 2.5-inch drives decline in share from 72 to 37%, forecasts the report.

Units will increase even faster than revenues as prices drop, growing by more than 8x from 10 million in 1993 to over 85 million by 1999.

Despite its projected decline in share of a much larger market, Japan’s purchases will grow by several times in absolute units and revenues and Japanese vendors are very well-positioned to increase their presence in both drive and memory card markets. Japan’s position in this market reflects its dominance in world portable computer production.

Smaller drives, especially those under 1.3 inches, have lower memory capacities and higher costs, putting them in a poor competitive position as flash cards evolve.

While flash cards are now competitive only at modest memory capacity levels of 1 to 2MB, this break-even point – the microdisk memory size at which flash cards offer comparable costs – is shifting upward.

But microdisk drive technology won’t stand still either. The disk drive industry, spurred largely by the demands of smaller subnotebook and pen-based computers and new personal digital assistants, may speed up the historical 30% annual increase in memory capacity, allowing microdisks to better compete with flash cards in higher-memory applications.

Drives will vastly increase their capacities and performance, leading to incredibly low costs per megabyte of memory storage by today’s standards, said F&S.

According to the report, increasing market opportunities will emerge for microdisks and flash cards outside the mobile computer arena in such products as desktop systems, digital photography, medical systems, and office and industrial automation. Wide acceptance of microdisks and flash cards outside the traditional computer arena, however, will require low prices and large manufacturing capacities, factors largely dependent on robust growth in the handheld computer market. 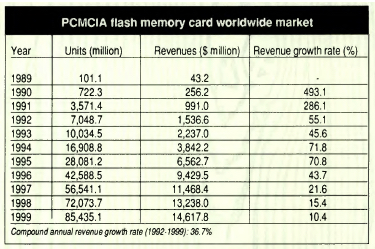 This article is an abstract of news published on the former paper version of Computer Data Storage Newsletter on issue 78, published on July 1994.