D2 Electronique S.A. (known as D2) is apart in the European storage industry. Its image is the one of a distributor putting HDDs in original enclosures.

But when COB Philippe Spruch visit the company and when you listen to him there’s a lot more to discover. Elsewise, how could it have managed to reach FF$45 million annual sales in computer storage, with profits so high its main executive rather not disclose them, and this with 100 employees that are in average 27 years old? The French company has entered the European market 18 months ago, by opening a subsidiary every 4 months. Its exports represented 40% of sales and goal is to reach 55% next year. D2 is also getting ready to invade the US. Spruch is a winner, a powerful man that looks like a second-line rugby player (a game he played In Strasbourg but as a prop forward), wearing a wide pair of suspenders he seems to never forget.

Computer Data Storage Newsletter: Your company is mostly known in the Macintosh environment for its original HDD drive housings, the first one was designed by Philippe Starck, with an eye in the middle, and the second one by the Scottish designer Neil Poulton. However, you consider yourself as a SCSI specialist, not only for Macintosh but also for PC workstations. What is really D2?
Spruch: We have a real image problem. D2 is not only the distributor that makes enclosures. Our job is just as noble as the one of a PC manufacturer that integrates HDDs. We take housings and we put electronic components inside. And lately, we developed our own drivers and own interface cards. And we’re not just involved in fixed HDDs. We are SyQuest’s first customer in Europe, the third or fourth one in the world. Additionally, with FF50 million of sales, we own 10% of the European magneto-optical market.

These special designs are they only for the image of the company or to sell better?
It’s to avoid misunderstandings with what some mailorder distributors do, like MisterMac in France for instance, that will now no longer be able to say they sell D2. Our products are better, they are becoming exceptional. If we manage to put ahead our ergonomic products we will eliminate those who pretend selling D2. All our half-height and smaller 5.25-inch products are starting to look this way. And it doesn’t cost us more.

How did the company first started?
We wanted to select a niche, large enough for us to grow, small enough not to meet major manufacturers too quickly like IBM and Compaq or distributors like Ingram, Merisel or Computer 2000. We were looking for a technical job to avoid box moving in the distribution and the general offer from computer manufacturers.

Why did you choose SCSI storage and first on Macintosh?
We consider SCSI as one of tomorrow’s standards. Besides, we will come to F&FW SCSI-2 then PCMCIA when we feel they’re in the heart of the market. Mass memory looked quite attractive, because users’ needs double each year and prices are cut down by half every year. This means we have an average unit price that hasn’t changed since we began, unlike most other markets, except that our main sales are on 240MB and even 500MB today when they were on 20MB 4 or 5 years ago. We had the ability to enter this activity with Pierre Fournier, my partner, our CEO and CTO, who, in those days, was with Normerel, the first company to integrate a SCSI interface into a PC. Additionally, at that time, SCSI was mainly for Macintoshes because there were no interface card problems. Since then, we have developed our own low-cost SCSI cards for PC environment and adapted ourselves to the market standards by distributing cards, from BusLogic for instance. And recently we started with workstations, and mainly with removable storage memory. 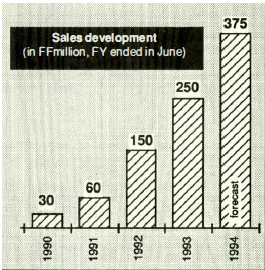 Which companies look like you?
We have competitors like PLI and MicroNet in the US or Formac in Europe in the Mac world, Storage Dimensions and Pinnacle in the PC environment.

What Is your distribution channel strategy?
We haven’t and refuse to make direct sales. We go through distributors. Our biggest customers are going to be wholesalers like Softmart and Feeder to flood the PC market.

Do your suppliers, storage peripheral manufacturers consider you as an OEM or as a distributor?
We are considered as an OEM on almost all products. We don’t buy anything from the distribution, it’s something known, acknowledged and not negotiable with our suppliers.

Do you also buy on the grey market?
We only buy from brokers when one of our suppliers is out of stock.

Won’t there be a risk for you if Apple get involved in low-cost add-on peripherals products?
In the disk segment, we buy at about the same price as Apple and our structure costs are lower. And, the most important, is that we find new products every 2 weeks. If Apple chooses a disk, it has to keep it for 2 years. Additionally, a large part of our sales comes from removable products, and I can’t imagine Apple approving SyQuest, Bernoulli or M-O’s in a near term. It is completely focussing on CD-ROM’s for the time being.

Are you actually developing special cards?
Yes, a card we will offer at Comdex to US integrators. It’s a SCSI card with a parallel port, slightly faster than the others with a 400KB/s transfer rate that we are going to specially push for the removable disk market. 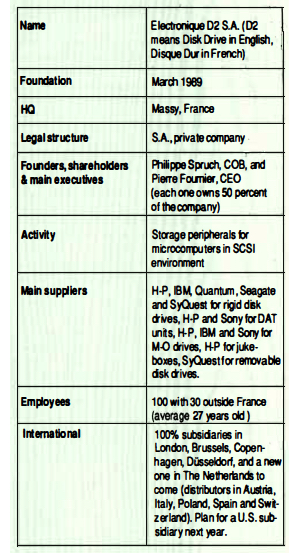 This article is an abstract of news published on the former paper version of Computer Data Storage Newsletter on issue 70, published on November 1993.

Note: In 1995, D2 Electronique acquired LaCie, subsidiary of Quantum into external disks and changed its name to LaCie. LaCie was sold to Seagate in 2012 for $186 million. Spruch became EVP of branded products at Seagate he left rapidly. He is now since June 2020 chairman EZRaider, président Degrenne. 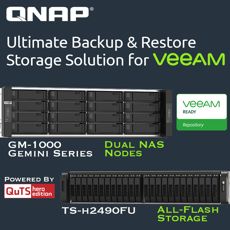