It provides businesses with the tools they need to protect their IT infrastructure – from VMware, Hyper-V and Nutanix AHV VMs and Amazon EC2 instances to physical servers and workstations, Oracle databases, and Microsoft Office 365 application data. The introduction of backup to Wasabi Technologies, Inc. in v10 gives customers the power to leverage scalable cloud storage while retaining the option to store confidential data on local or off-site storage devices and tape media.

Features in Backup & Replication v10 include:

“Wasabi is changing the way businesses approach cloud storage by combining affordability and simplicity with speed and reliability,” said Bruce Talley, CEO, Nakivo. “We are thrilled to partner with Wasabi and provide a data protection solution to allow businesses to maximize the advantages offered by Wasabi.“

“By combining Wasabi’s hot cloud storage with Nakivo Backup & Replication, IT decision makers are empowered with a better choice to simplify their data protection,” said Dave Friend, CEO, Wasabi. “In partnership with Nakivo, Wasabi enables more businesses to focus on growth, innovation and the other critical business functions that data powers for them – not on its overpriced, complicated storage.” 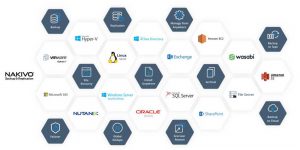 “Our objective for Nakivo Backup & Replication v10 is to give businesses even greater flexibility and control over the whole data protection process,” said Bruce Talley, CEO, Nakivo. “We deepened the pool of protected environments with support for vSphere 7 and Linux workstations, added a new cloud storage destination in Wasabi and introduced P2V Recovery to shorten RTOs and simplify physical to virtual migrations.“

“With Nakivo Backup & Replication, we were able to simplify DR, save costs, and utilize existing NAS servers. The licensing costs that were offered by Nakivo turned out to be cheaper than the yearly maintenance costs of our previous product,” says Alejandro Canet, IT project coordinator, Save the Children Spain.