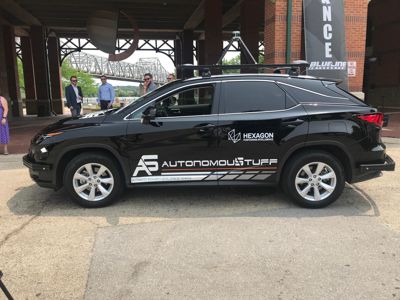 With this integration, it allows organizations to simplify how they manage and utilize large data sets as they move out of the vehicle into the data center and across private and public clouds. Qumulo will enable Autonomous Stuff to send large volumes of file data to research, development and operational applications – all without requiring complex tiering or specialized storage networks.

“ADAS and autonomous vehicle research presents data dilemmas at an unprecedented scale, so it’s critical we bring the right storage solution into a project at inception,” said Bobby Hambrick, founder and CEO, Autonomous Stuff. “Integrating Qumulo’s modern hybrid file software into our offering allows us to provide the simplicity of a single, easy-to-manage solution that also provides a path to the cloud and cloud-based applications.“

Fully-Integrated, End-to-End Solution Simplifies Large-Scale Research
ADAS and autonomous vehicle research require file storage on a massive scale. Qumulo’s hybrid file software is designed to store up to exabytes of data, whether the workflows are housed on-prem or in cloud environments. It scales as data volumes grow and provide real-time visibility into the storage system, down to the file level and within a single namespace, giving users visibility and fine-grain control of their data. Qumulo also offers storage platforms, including all-NVMe, flash-accelerated hybrid storage, active archive, hybrid cloud or cloud-native in both AWS and GCP.

“Modern Autonomy and IoT systems generate enormous amounts of data tat needs a platform with simplicity an performance to shorten development cycles to market,” said Michael Cornwell, CTO, Qumulo. “Qumulo’s hybrid file software brings a fast, easy to use solution for solving the challenges of sensor data management for large-scale ADAS and IoT workflows from the vehicle to private and public clouds. We are excited to partner with Autonomous Stuff, a recognized leader in this space, and to accelerate R&D bringing autonomous systems to all aspects of our lives.“

Autonomous Stuff provides R&D platforms, products, software and engineering services to aid in the advancement of robotics and autonomy. Its customers value the convenience of finding the modular-based automation software solutions, engineering services, perception, computing, GPS and interface components in one location. With offices in the US, China and Europe, the company provides solutions for automated driving to thousands of customers worldwide.