WW market demand for computer tape drives utilizing helical scan technology will exceed $957 million at OEM price levels in 1996, a 27% annual growth rate from the $231 million value of the 1990 market.

Among the key findings in the report are:
* DAT and 8mm drives used for data recording will share the lead in this fast growing market, accounting for more than 98% of helical scan revenue each year through 1996. VHS-based drives will be limited to specialized, high-performance applications.
* DAT drives, now providing up to 2GB of storage capacity in 3.5-inch packages, have wide user appeal due to compact, low-cost media and the ability eventually to provide up to 10GB in the 3.5-inch form factor through the use of data compression techniques and metal film tape. “DAT drives are starting to win competitions over quarter-inch cartridge and 8mm drives and will be used by a number of major system manufacturers, so far including DEC and Hewlett-Packard, ” Abraham states. “Others are still evaluating DAT.”
* Shipments of DAT drives will grow from 65,800 units in 1990 to 875,000 in 1996, a 54% annual growth rate. Declining prices will limit compound revenue growth to 43% over this same period, from $70 million in 1990 to $612 million in 1996. A highly competitive market environment has already emerged, with many of the DAT manufacturers jockeying for market position with second-gen products.
* 8mm drives continued their steady market penetration, gaining coveted endorsement by IBM in the AS/400 mid-range, RISC/6000 workstation, and high-end PS/2 systems according to Freeman. “This class of drives will remain popular choice in networked desktop systems and workstations which utilize high capacity HDD drives,” he states. “Automated media libraries will enhance their appeal.”
* Shipments of 8mm devices will rise from 100,200 units in 1990 to 228,000 in 1996, a 15% annual growth rate. Revenue growth for 8mm drives will be at an annual rate of 13%, growing from $157 million in 1990 to $331 million in 1996. 8mm drives with 5GB of storage capacity in a 5.25-inch package have the highest storage capacity of any small form factor tape drive. Drives with data compression capability have been announced for 1991 delivery. Increased shipments of high capacity disk drives and the increased use of color graphics fueling demand for high-capacity small-form-factor tape drives such as OAT and 8mm products, according to the report.

A total of 22 companies are identified which have announced helical scan drives or are believed to be developing such products. Of the 22 manufacturers, 19 are involved in DAT products, 2 with 8mm products, and 1 with VHS products. Specs are given for 51 models of tape drives currently offered by 19 manufacturers; 20 offerings from 8 media makers are also listed. 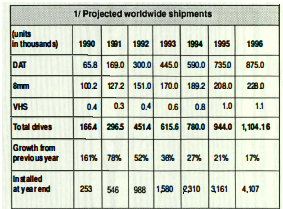 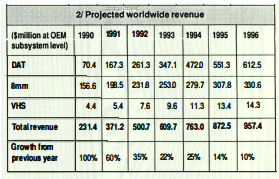 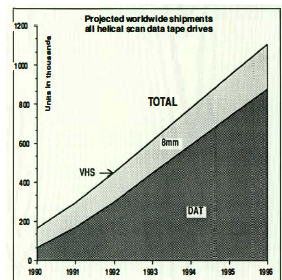 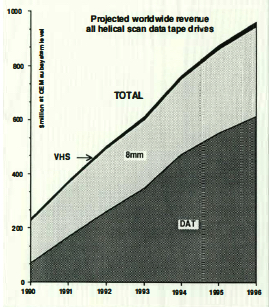 This article is an abstract of news published on the former paper version of Computer Data Storage Newsletter on issue 44, published on September 1991.