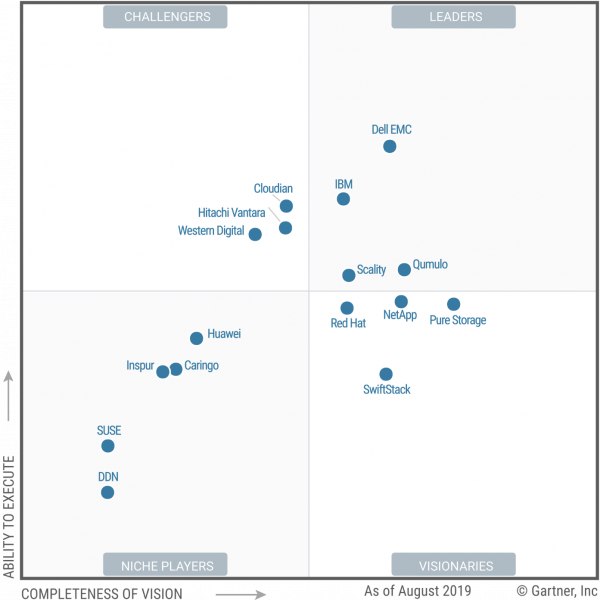 Gartner, Inc. just released its Magic Quadrant for Distributed File Systems and Object Storage for 2019 and again it contains some surprises.

The team of authors changes one more time as John McArthur is replaced by Chandra Mukhyala and the two others, Julia Palmer and Raj Bala, already contributed to the 2018 edition.

The first comment is why Gartner continues to mix file and object storage. In that case, why not rename this Magic Quadrant Unstructured Data Storage?

The next reaction is related to the products chosen for each company, some have multiple, some have one because they sell only one product but why DDN is only limited to WOS while they have ExaScaler, GridScaler, now Tintri and Nexenta. IBM is considered with Spectrum Scale and COS and Dell EMC with Isilon and ECS, so what is the rationale behind this selection. The result for DDN would have been completely different, landing in the leader quadrant with these 5 technologies. We understand that the Magic Quadrant is about company playing in a category and not about a product. The latter option can’t be even considered as the two examples listed above (IBM and Dell EMC) show two products in the report. But we understand that some companies have refused to participate, in that case, it seems that they were sanctioned.

The position of IBM should be associated with Red Hat and Red Hat should be removed from the report then IBM has to be replaced more right and top in the leader quadrant. The position for Western Digital Active Scale is strange, it has to move back in the niche quadrant.

The value of such study resides in two ways : snapshot and flow. Criteria explain the snapshot even if the remark of product selection creates confusion as mentioned above. The second dimension is about the move analysis and we did such study over the last 4 editions and list moves with the image below with 4 colors:

We mentioned last year some absences. It is the case this year again for Fujitsu, Hedvig, Minio, NEC, Panasas, Quobyte, Rozo Systems, Veritas, WekaIO, and the recent Vast Data.

With the disaggregated wave and especially NVMeoF, we’d like to see criteria evolvement as new architecture arrive on the market and are taken seriously by end-users and partners.

Every year we write some comments and invite Gartner to make changes to reflect the market reality so we hope the 2020 report will consider these few points.