There was 130 exhibitors and sponsors with approximately 6,000 attendees according to the organizer, so pretty stable compared with last year figures.

We noticed that 80% of visitors are vendors attendees giving the event an image of industry event by and for the industry as a annual market rendez-vous. There was not really end-users. It explains why the show is a technology show without some large vendors, systems or storage, on the expo floor.

This is the case of HPE, on the sponsor list but no booth, same for Pavilion Data Systems, IBM neither sponsor or exhibitor had a keynote, Dell EMC, Hitachi, NetApp, Kaminario… all absents.

The opposite is true with the presence of specialists such as Broadcom, FADU, Marvell, Mellanox, Microchip, SK Hynix, Toshiba, Viking, and Western Digital, but we still wonder why some companies announced their presence but finally didn’t show up with their own booth like Intel, Micron, Samsung or Seagate.

On the other hands, some players choose to have pods on some partners booth like WekaIO or Pure Storage on Mellanox one, Pliops on Xilinx, Liqid on Phison Electronics, DriveScale on Toshiba or Lightbits Labs on International Computer Concepts to name a few. 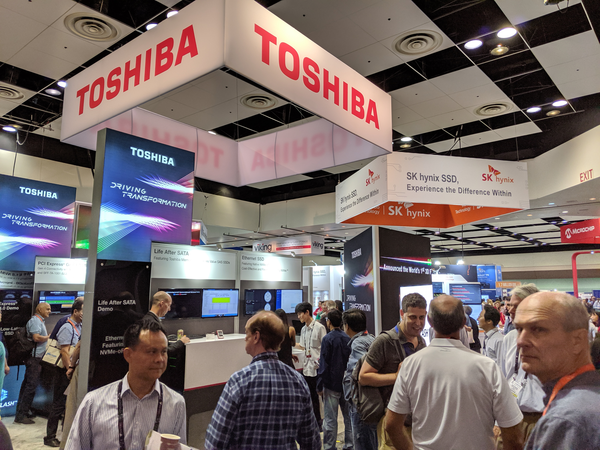 Conference organizers published a poster of the flash industry timeline, you can find the entire document here. 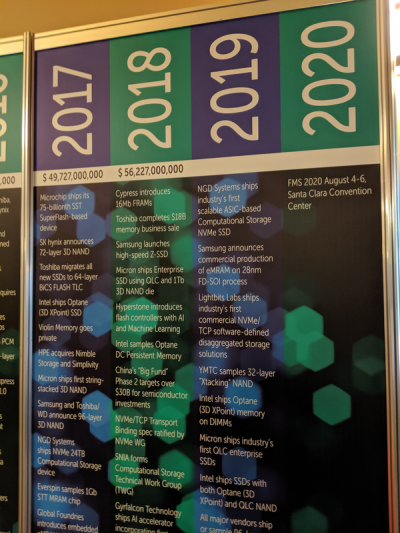 As mentioned,  the event has a huge conference program with lots of sessions and this year topics were around enterprise storage, controllers, flash and new memory technology, SSD, persistent memory, NVMe, software, computational storage, security, AI/ML, consumer and mobile applications, hyperscale and automotive. Some vendors chose to present a session without being an exhibitor thus limiting their exposure but cost as well.

This event confirms what we know for several years: US drives HDD market with Western Digital and Seagate are trying to play a role with Micron and Intel in the SSD/flash/NVMe landscape controlled by Asian companies such Samsung, SK Hynix, Toshiba to name a few.

But it shows again that SSD/flash/NVMe software is almost exclusively developed and controlled by Israeli people. To illustrate this let’s mention a few examples like Toshiba Kumoscale developed by OCZ people following the OCZ acquisition by Toshiba in 2013, Annapurna Labs acquired by AWS in 2015 and more recently E8 Storage, Plexistor acquired by NetApp in 2017 or even Anobit acquired by Apple in 2012. Excelero, Kaminario, Lightbits Labs, Pliops or ScaleMP can also be listed in that domain. 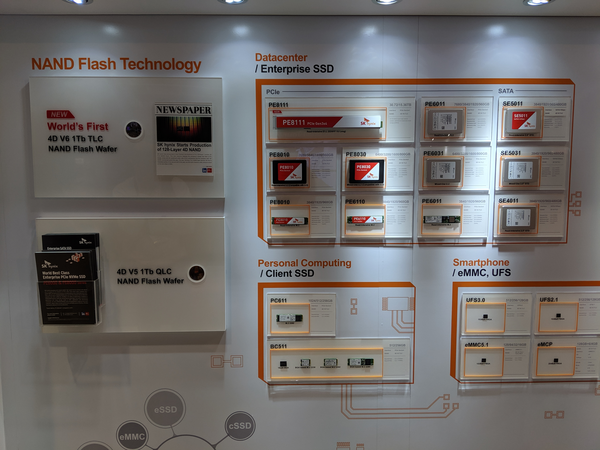 Keynotes and sessions covered multiple angles such increasing density with new layers, 4 and 5 bits per cell, 4D NAND, PCIe Gen 4 and even future NVMe-oF implementations and directions, zones storage, computational storage among others.

Among the ton of announcements made during FMS, here is a selection of vendors around performance, new memory and storage devices, PCIe, NVMe-oF, storage processor, computational storage, listed by alpha order: