Many people connected and working in the storage industry know Atempo for quite long time but the recent company events invited us to update its company profile.

Genesis and growth
Founded in 1991 in France by Dominique Vinay, the company was named Quadratec for approximately 10 years before changing it to the current name Atempo during the French Forum Stockage conference in 2001.

Recognized as a pioneer in modern data protection for open systems, Atempo appeared for long time as an innovator in backup and later in archiving with product such Time Navigator aka Tina and more recently Digital Archive promoted as ADA renamed early 2019 Miria.

In the meantime, the company has made a few strategic acquisitions – Storactive and Synerway – to expand technology footprint and geographic coverage and even spent a few years (2011-2019) under the ASG umbrella before a new life within the Wooxo-Atempo group.

Legally the company is privately owned by Kick Start Management, a holding entity owned by Luc D’Urso and Cyprien Roy, respectively CEO and COO of Atempo.

A few months ago, Atempo decided to launch a new entity named NextIno, acting as an AI lab, based in Orléans, France, and led by Bernard Peultier, a long time Atempo executives and father of Atempo Digital Archive. 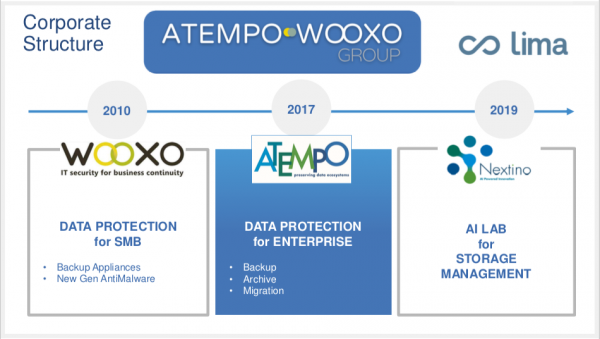 As mentioned recently, the last addition to the group is the Lima asset, a company that developed a personal cloud storage and sync engine. The image below summarizes Atempo life since the inception. 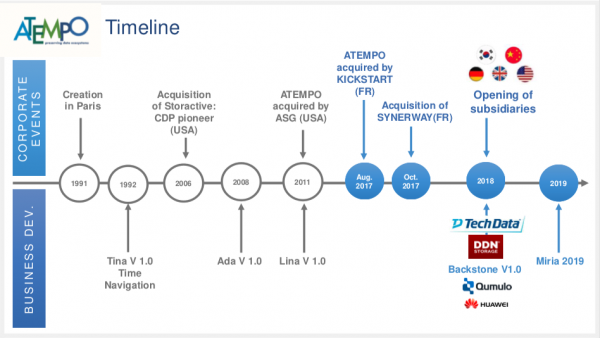 The new Atempo is now present in France of course and opened recently a new headquarter in Massy, France, but is also in UK, Germany, Italy, Belgium, USA, China, Korea and Singapore.

The company has an headcount of 135.

New identity
The new Atempo capitalizes on more than 2 decades of savoir-faire in data management. The tag line is now Preserving Data Ecosystems, the green color appeared and the logo is new as well. 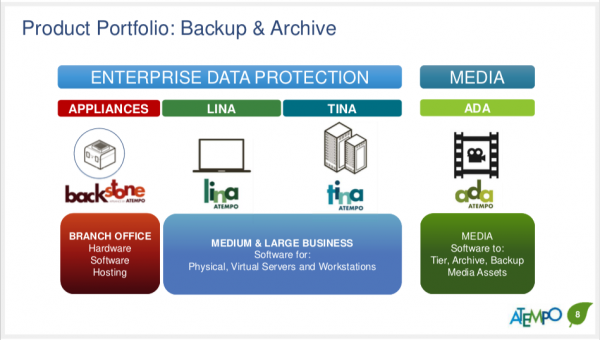 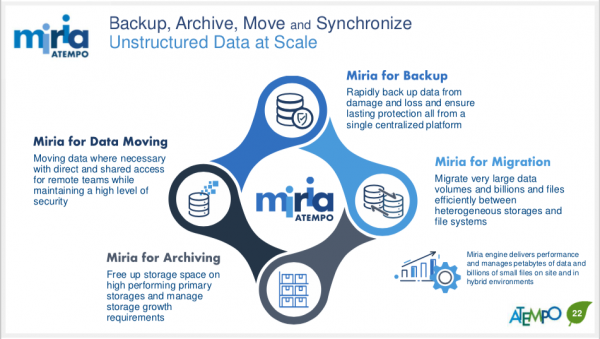 Business Models and Initiatives
The business is 100% indirect with a large networks of VADs and VARs. It is completed by key strategic alliances with Huawei, DDN and Qumulo around data migration.

Atempo is used by organizations including BPCE, Inserm, Ariane Space, Carrefour in France, Banca Sella and Terna in Italy, NFB in Canada, Continental in Germany, BBC in UK and St Jude Children Hospital and Viacom in USA.

Future directions
Atempo is a true believer in AI and plans to add in Miria first developments made at its AI lab NextIno before end of this year. We should see the first iteration of the data movement powered by AI featuring auto-tuning and a dedicated Lustre fastscan capability.