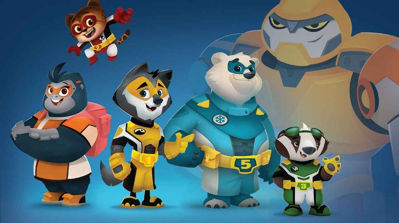 Based in Toronto, Industrial Brothers creates engaging content with memorable characters that tells stories for kids of all ages. The company works with broadcast, production and distribution partners to create shows such as Top Wing (Nickelodeon), Dot! (CBC/Universal Kids/Hulu), Yup Yups (Disney Jr.) and the YouTube-exclusive action series Gummandos.

The growing studio has tripled in size over the past 24 months, and found that its previous Solaris-based ZFS storage system was unable to scale in order to meet the growing data volumes.

“Too often we found ourselves managing the storage system, rather than our valuable data residing within it. That was a big red flag, and it’s ultimately what led us to Qumulo,” said Jean-Paul Godmaire, head of IT, Industrial Brothers. “We selected Qumulo because its file system gave us both the scalability and high-performance that our studio requires. I also appreciate Qumulo’s frequent software updates, which ensure that we have the most up to date features and functionality.“

Traditional enterprise software often adheres to annual or semi-annual product release updates. In contrast, as part of its continuous deployment model, Qumulo releases its enterprise-grade software every two weeks in order to provide customers like Industrial Brothers with new features and upgrades.

Another key differentiator for Industrial Brothers was Qumulo’s commitment to its customers.

“Qumulo’s customer success team is remarkable. Even with simple requests, they go above-and-beyond what is required, helping us to address not just our storage-related questions, but ways that we can improve our workflows and continue growing our business efficiently,” said Godmaire.

“For studios like Industrial Brothers that develop their content ideas from initial concept to final delivery, storage is a critical investment, because it houses the company’s entire intellectual property libraries,” said Molly Presley, director of product marketing, Qumulo. “There’s a real need in the media and entertainment industry for immensely scalable file storage that can easily store tens of billions of files, while delivering maximum performance with real-time visibility and control, which is where Qumulo sets itself apart from the competition.“