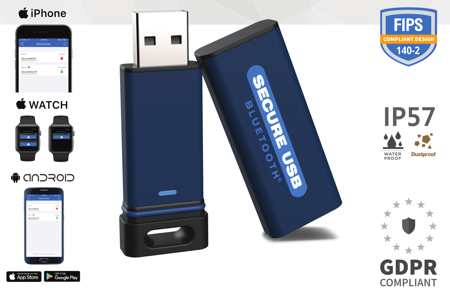 The devices were on display for media, industry leaders, and technology enthusiasts. Both products are available to the public for purchase on the company’s website. SecureUSB KP and SecureUSB BT both use patented DataLock KP/BT technology licensed from ClevX, LLC. 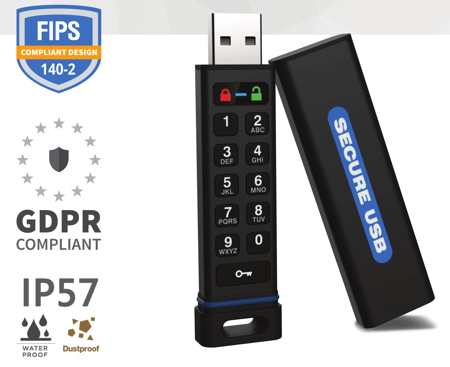 SecureUSB BT is a hardware encrypted flash drive that requires user-authentication via a mobile device (Android/iPhone, tablet or Apple Watch). The device is remote management ready with GPS based geo-fencing, time-fencing, remote wipe, and remote unlock. It is host-OS independent and works with any device that has a USB port, including TVs, printer/scanners, DVRs, thin clients, and embedded systems.

SecureUSB BT was displayed at 2019 CES Innovation Awards Showcase along with its sister product SecureDrive BT, which was recognized as CES 2019 Innovation Award Honoree in the computer accessories category.

SecureUSB KP is a hardware encrypted flash drive with user authentication via onboard keypad and FIPS compliant design. It has a built-in antivirus designed for USB drives, with optional Automatic Cloud Backup to major cloud providers. It provides a secondary software encryption layer with a separate key for files in transit to the cloud and at rest in the cloud. SecureUSB KP is OS independent and works with any OS. It features a secure hardware encryption. No encryption info is exchanged between the drive controller and the host OS.

“We expect the SecureUSB products to become bestsellers among portable storage devices in 2019 due to their unique features and affordability,” says Vanoverbeke. “Both SecureUSB BT and SecureUSB KP can be used at home or business to save sensitive files. The DataLock Remote Management feature of the SecureUSB BT makes it attractive to enterprises, law firms, and media and design companies where a company IT administrator can take full control of where and when the drive can be unlocked, the ability to remote wipe data and disable access – even if the user has a drive pin. All from a host OS independent web console.“